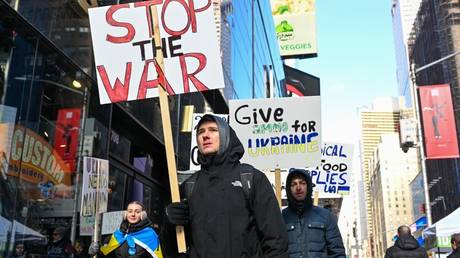 Fewer US adults are sold on backing Kiev against Russia than in earlier months of the conflict, a Reuters/Ipsos survey has shown

Six months on from the start of Russia’s military offensive against Ukraine, nearly three in ten Americans are unsure about continuing to support Kiev in the conflict, a new poll has shown.

While 53% of US adults agree that Washington should continue to support Kiev “until all Russian forces are withdrawn from territory claimed by Ukraine,” 28% are undecided, according to a Reuters/Ipsos poll released on Wednesday. Doubts about continuing to pump weapons and other aid into Ukraine are especially prevalent among independents, at 37%, while 18% of Americans oppose the shipments altogether.

The survey suggests waning support for US involvement as the conflict drags on, contributing to surging inflation on the home front. In fact, 40% of Americans now agree with the statement that “the problems of Ukraine are none of our business, and we should not interfere.” That compares with 31% when the same question was asked in April.

US President Joe Biden announced $3 billion in additional military aid to Ukraine on Wednesday, the biggest package of weaponry earmarked for Kiev since the fighting began in February. The US has committed more than $15.5 billion in military assistance to Ukraine since backing the overthrow of Kiev’s elected government in 2014. The lion’s share of that aid, $13.5 billion, has been announced over the past six months.

Americans are evenly divided on restricting imports of Russian oil and natural gas if doing so means paying higher prices for their own energy use. The survey showed that 50% support limits on imports from Russia, even at the expense of higher prices. Similarly, 49% agree that it’s more important to have gas supplies for their homes and businesses than to try to influence Russia. However, only 21% agree that anti-Russia sanctions aren’t worth the impact they’re having in the US.

Inflation is a far greater concern than the Ukraine crisis, the poll showed. While 58% of Americans are following the conflict at least “somewhat closely,” 75% are closely tracking news on inflation.