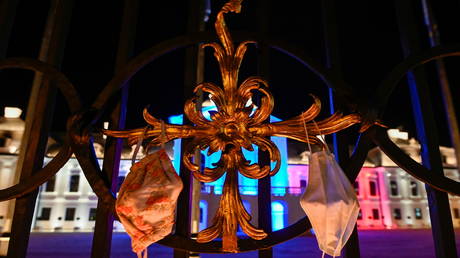 Slovakia has become the latest European country to implement lockdown restrictions on people who haven’t had the Covid vaccine, as it seeks to prevent a resurgence in infections and hospital admissions over the winter.

Slovakian Prime Minister Eduard Heger announced the new measures in a press conference on Thursday, declaring a “lockdown for the unvaccinated” after the country reported a record number of new cases.

The new restrictions in Slovakia, which come into effect on Monday, will require people to have been vaccinated or have recovered from Covid in the past six months to enter restaurants, non-essential shops, or public events.

In the past few days, the European nation has seen record numbers of new infections, including over 8,000 on Tuesday, with hospitals running out of space to treat Covid patients.

Slovakia has one of the lowest rates of vaccination in the European Union, with over 50% of individuals still not jabbed. The country of around 5.5 million has so far only inoculated 2.5 million people against the virus.

Earlier this week, Austria became the first nation to impose restrictions on unvaccinated individuals, as it sought to limit pressure on hospitals and emergency care units. The move came into effect at midnight on Monday for anyone aged 12 and older who has not received their Covid vaccine or recently recovered from the virus.

The German state of Bavaria and the Czech Republic followed Austria in restricting access for unvaccinated individuals. Only people who can show proof of vaccination or that they have recently recovered from Covid will be allowed to enter public spaces, such as restaurants and shops.