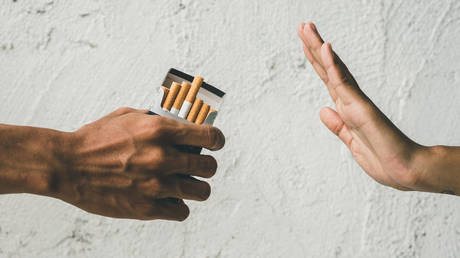 Canadian cigarette companies will be required to carry health warnings on each individual cigarette, the country’s minister of mental Health and addictions, Carolyn Bennett, announced during a press conference on Friday.

“Adding health warnings on individual tobacco products will help ensure that these essential messages reach people, including the youth, who often access cigarettes one at a time in social situations, sidestepping the information printed on a package,” Bennett told reporters.

The government began a 75-day consultation period for the proposed change on Saturday. If the change is adopted, it will take effect in the second half of 2023. While the message to be printed on the individual cigarettes has not yet been decided upon, the favorite suggestion thus far is “poison in every puff.”

Packages will also include a longer listing of detrimental health outcomes associated with smoking, from stomach and colorectal cancer to diabetes and peripheral vascular disease.

Canada became the first country to include graphic images of lung cancer and other smoking-related harms on cigarette packaging in 2000, kicking off a worldwide trend as governments endeavored to shock smokers with the most gruesome imagery they could find. By 2012, those photos were required to cover 75% of cigarette packages, both front and back.

According to Bennett, those once-disturbing photos of diseased hearts and bald cancer patients “may have lost their novelty, and to an extent we worry that they may have lost their impact as well.” Previous health ministers have acknowledged that “gross and scary” imagery has become increasingly necessary as smokers grew desensitized to the original images.

Anti-smoking advocates praised the move. “This is going to set a world precedent,” Canadian Cancer Society senior policy analyst Rob Cunningham told the Guardian. “It’s a warning that you simply cannot ignore. It’s going to reach every smoker, with every puff.”

Canada, like most countries, has experienced a steady drop in smoking rates over the past few decades, with just 10% of residents reporting smoking regularly, according to Statistics Canada. The government hopes to slash that rate by half by 2035. Some 48,000 deaths in the country are linked to smoking every year, while 80% of lung cancers are associated with tobacco use.