Archaeology is under attack by wokeness 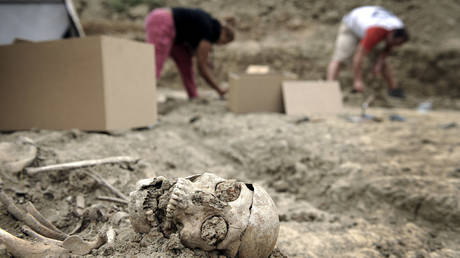 Identifying the sex of ancient remains must stop, woke academics insist. If they have their way, it will be a scientific disaster

Anthropologists can tell a lot from human skeletal remains. Even when any characteristics that could indicate a person’s biological makeup are long gone, those with years of education and experience can paint a relatively vivid picture of the deceased.

One of the first observations scientists make when studying exhumed human remains is the sex of the subject, and, by extension, their gender – a key factor in figuring out what kind of life he or she may have led.

With the recent push of the social justice brigade to inject their ideology into every scientific field – which includes mathematics, physics, and even rewriting history to suit their agenda – the latest fields to come under attack are archaeology and anthropology.

In a Twitter thread that garnered close to 60,000 likes, Canadian master’s degree candidate Emma Palladino took issue with the offensive, yet not scientifically inaccurate, memes which depict the life of a transgender person whose bones are exhumed a thousand years later by archaeologists, and subsequently misgendered – or rather, identified as their biological sex rather than their gender identity.

She has since locked her account following a heavy public backlash over this effort to push woke activism into the academic field.

Despite what progressive scholars like Palladino might say about the difference between sex and gender, and how it’s made up of a whole spectrum that scientists have yet to unpack, the scientific assumptions and inferences that archaeologists and anthropologists make are not governed by the ideas of white, male, or cisgender supremacy, unlike what social justice ideologists would like the world to believe.

The push to codify gender ideology into archaeology and anthropology is not something that Palladino alone is doing. In fact, the movement has received broad-spectrum support from other archaeologists and anthropologists who formed a group called the Trans Doe Task Force.

The group wants to bar anthropologists from identifying remains as male or female, claiming that existing standards of forensic human identification are a disservice to people who do not fit within the ‘gender binary’. Essentially, anyone who existed out of the so-called binary is being misgendered by forensic archaeologists and anthropologists.

In the group’s mission statement, it proposes a “gender-expansive approach” to identifying human remains by looking for contextual clues such as clothing “culturally coded to a gender other than their assigned sex.”

Allowing modern social justice standards to trump basic biology could open up the field to a host of modern assumptions and potentially destroy scientific value for the sake of validating the beliefs of 21st century first-world activists. Some scientists refuse to take the issue sitting down and are fighting back against the ‘wokification’ of their fields.

One such academic is San Jose State archaeology professor Elizabeth Weiss, who described the elimination of gender classifications as “ideologically-motivated fudging.”

In an interview with the College Fix, Weiss points out that the current rise in transgenderism in Western societies is a “social and not biological” trend. Her remarks are backed up by statistics that show the majority of young people coming out as transgender do so in peer clusters, rather than as individuals who are diagnosed with gender dysphoria. “Retroactively de-sexing obscures this obvious fact,” Weiss says.

And that’s not the only problem. Applying biological sex to remains has helped dispel myths detrimental to women, the archaeologist said, noting that in the past, early anthropologists sometimes mistook robust female skeletons as male ones in Indigenous American finds.

The mistake, she said, created false stereotypes that women simply didn’t work as hard as men.  Decades of scientific work to determine which traits were determined by sex helped to erase these false stereotypes and correct the record. Indeed, the policy of erasing all this progress in the name of wokeness is a step backward for both science and women’s rights.

Due to her outspoken stance, her own school has locked her out of its human remains collection – she believes it was an act of retribution against her opposition to the repatriation of human remains.

Gender ideology is not the only thing being pushed into archaeology and anthropology. The Critical Race Theory crowd is also trying to force its way into the fields by demanding that scientists stop classifying remains by race. Those spearheading the push argue that “ancestry estimation contributes to white supremacy.” What isn’t white supremacist these days?

If the woke mob gets what it wants, anthropology and archaeology could end up with about as much value as astrology – or any of the host of modern-day ‘sciences’ that are so driven by ideology that they leave no room for the pursuit of truth.