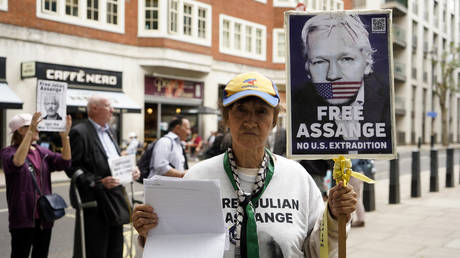 Julian Assange’s legal team filed an appeal on Friday to stop the WikiLeaks co-founder’s extradition to the US, where he faces espionage charges that carry a prison sentence of up to 175 years.

According to WikiLeaks, Assange’s lawyers filed “perfected grounds of appeal” before the UK High Court of Justice against the US government and UK Home Secretary Priti Patel, who approved the extradition of the Australian-born editor in mid-June.

The appeal argues that “Julian Assange is being prosecuted and punished for his political opinions,” while the US government “misrepresented the core facts” of the case to the UK judiciary. It adds that the request to extradite the WikiLeaks co-founder violates the relevant treaty between the US and the UK, as well as international law.

The document also reportedly contains some new evidence that has been compiled since the UK court ruled on Assange’s extradition in early 2021.

The editor’s wife, Stella Assange, said: “Overwhelming evidence has emerged proving that the US prosecution against my husband is a criminal abuse,” adding that the high court will now decide whether her husband is given the opportunity to make his case against the US before open court at the appeal.

In early June, the Wall Street Journal reported that Assange’s lawyers had filed two appeals to fight his extradition to the US, just a day before the deadline for the legal action was set to expire. The exact details of the appeal, however, were unclear.

Assange has effectively been in confinement since 2012, when he sought asylum in the Ecuadorian Embassy in London, seeking to avoid extradition to Sweden, where he faced sexual assault charges, which have since been dropped. Ecuador revoked Assange’s asylum status in 2019, and the British police transferred him from the embassy to the maximum-security Belmarsh Prison, where he has remained ever since.

A British court initially refused to surrender Assange to the US, citing fears that he would be subjected to inhumane treatment. Later, Washington managed to convince the British judges that the journalist’s rights would be respected. As a result, UK Home Secretary Priti Patel rubber-stamped the WikiLeaks co-founder’s extradition to the US in mid-June.

Assange has been a target for the US since 2010, when WikiLeaks released a trove of classified documents that depicted alleged war crimes committed by the US forces during the wars in Iraq and Afghanistan. He has since been accused of conspiring to hack Pentagon computers and is charged under America’s 1917 Espionage Act over publication of classified materials.