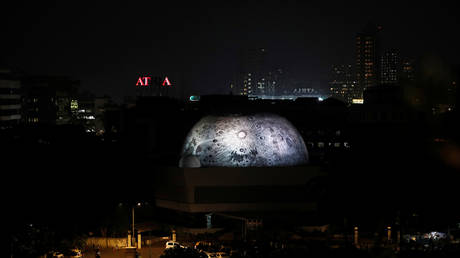 An exoplanet some 70% the mass of Jupiter and about 1.4 times its size has been discovered by astronomers at India’s Physical Research Laboratory (PRL). The behemoth is 752 light years away from Earth, and has an incredible orbit.

The new discovery was revealed by the Indian Space Research Organization on Tuesday in a statement saying the country’s PRL Advanced Radial-velocity Abu-sky Search (PARAS) had measured the movements of the newly-discovered exoplanet between December 2020 and March 2021.

The planet, named either HD 82139 or TOI 1789 depending on which cataloguing method is used, is ultra-hot – with a surface temperature up to 2,000 degrees Kelvin.

India’s PRL Advanced Radial-velocity Abu-sky Search (PARAS), an optical fiber-fed spectrograph, observed t he exoplanet and its movements from the Mt. Abu Observatory, according to the space agency. Not only is the planet ultra-hot, but it is also one of the closest to an orbiting star yet discovered.

The measurements obtained via PARAS were confirmed by Germany’s TCES spectrograph in April, and further verified by independent photometric observations from the PRL’s 43cm telescope, also located at Mt. Abu.

The exoplanet has an unusually quick orbit – a mere 3.2 days. The pace indicates that its distance from its host star is one-tenth the distance between Mercury and the Sun. This makes the exoplanet one of fewer than 10 such solar systems discovered thus far. Given the closeness to its host star – an aging orb 1.5 times the mass of the Sun – the new planet is also one of the lowest density planets yet discovered.

Planets so close to their host stars, with a distance less than 0.1 AU and masses between 0.25 to several times the mass of Jupiter, are known as “hot-Jupiters.”

The Indian space agency hailed the detection of the new planet as an opportunity to “enhance our understanding of various mechanisms responsible for inflation in hot-Jupiters and the formation and evolution of planetary systems around evolving and aging stars.” It is the second planet to be discovered by PARAS, with a previous discovery taking place in 2018.