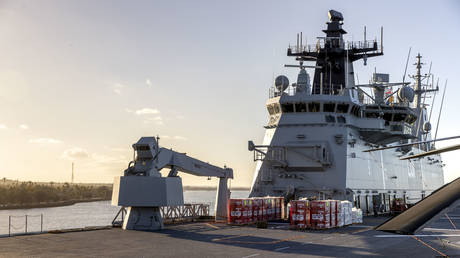 Australia’s Department of Defence has confirmed that the country’s largest warship had a power failure while on a mission, after problems were reported by the local media.

The HMAS Adelaide was affected while delivering humanitarian aid to the Pacific island nation of Tonga and is expecting civilian specialists to arrive and “conduct an assessment of the affected systems,” the Defence Department said on Monday.

The statement comes after ABC News, Australia’s national broadcaster, revealed that the ship remains “crippled” after days of repair work failed to resolve the power situation.

Warships cost a lot of money because, in battle, they’re not supposed to have a single a point of failure. Redundancy is built in bow-to-stern and port-to-starboard. HMAS Adelaide’s “total power failure” is therefore of considerable concern. #auspolhttps://t.co/cvP4OqJN47

The news raised some questions about the state of the Australian military. Independent Senator Rex Patrick, who represents South Australia, said the ship’s reported “total power failure” was of “considerable concern” to him, since military hardware is supposed to have redundancy of all systems to remain viable in battle.

The Defence Department denied the claim that the ship’s backup power system failed too. The broadcaster reported problems with backup systems, citing sources onboard the HMAS Adelaide. The military said the ship’s essential functions, like freezers, were operational, as was air conditioning in “most areas of the ship.”

HMAS Adelaide is a Spanish-built Canberra-class landing helicopter dock and the largest ship in the Royal Australian Navy. Earlier this month, she was dispatched to Tonga to deliver humanitarian aid in the wake of the January 14 underwater volcanic eruption and tsunami in Tonga.

While en route, an outbreak of Covid-19 happened on board, with 23 infections reported by the Defence Department last week. The government of Tonga allowed the ship to dock on Wednesday and offload 40 tons of relief cargo despite concerns over the disease. The docking permit was conditioned on the ship sailing off immediately afterward.

In the status report cited by ABC News, Captain Stuart Watters wrote that personnel affected by Covid-19 “are being provided with medical care and being supported,” while “a number of people who were originally identified as infectious have been cleared to return to duty after completing quarantine.”