Austrian hospitals to make the call on life & death during Covid 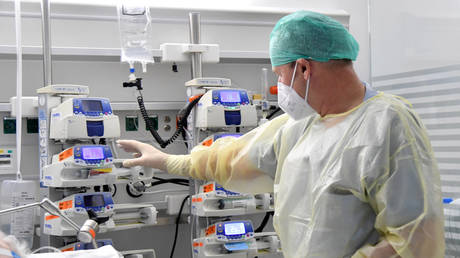 Clinics in the Austrian region of Salzburg have set up a special assessment team tasked with identifying Covid patients who have a higher chance of survival; the rest may soon have to take a back seat.

Amid a dramatic spike in Covid cases, medical personnel warn they may soon have to make the heart-wrenching choice of which patients get life-saving treatment and which ones will have to wait, Austrian media report. Intensive care units in the Salzburg region are packed, with the number of patients treated there setting a new grim record on Tuesday, reaching 33. The region ranks amid Austria’s hardest-hit, logging more than 1,500 new infections per 100,000 residents in a week. In an emotional plea for help to the local government, the head of Salzburg’s hospitals warned that soon clinics would likely not be able to guarantee the existing level of standards in terms of medical treatment. A representative for the city clinics likened the situation to “running into a wall.”

The region’s governor, Wilfried Haslauer, announced on Tuesday that some of the Covid patients whose condition was no longer life-threatening would be transferred from hospitals to rehabilitation centers to make room for more serious cases.

In neighboring Upper Austria, the situation is no better, with the number of deaths in intensive care units surpassing figures seen in all the previous Covid waves. Speaking to Austria’s Der Standard paper on condition of anonymity, healthcare workers there said they had free beds “because the infected are dying.”

For the time being, the creation of a so-called ‘triage team’ in Salzburg hospitals is being described as a “precautionary measure.” The panel is made up of six people: one legal expert and five providers from various medical disciplines. If push comes to shove, they will be deciding which patients stand a chance and which treatments have little prospect of success.