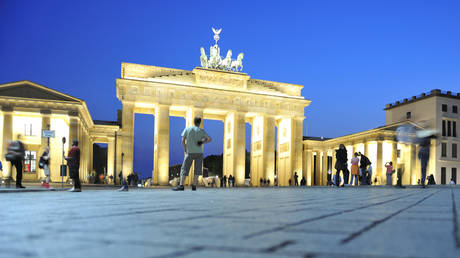 The lights at the Brandenburg Gate could be turned off to save energy, mayor says

Belin Mayor Franziska Giffey has backed the idea of not illuminating various landmarks, including the iconic Brandenburg Gate, for the sake of energy conservation. Even some street lights may be turned off without compromising safety, she said.

“In the situation we are in, we have to examine all the options for saving energy,” the top city official told Germany’s dpa news agency.

She suggested that the reasonable balance between cutting energy demand and keeping the city looking good, would be to switch off lights after midnight.

Conserving energy through simple acts like turning lights off when nobody is in the room is a normal thing that everyone did when she was a child, the 44-year-old official added.

Giffey backed the idea voiced last weekend by Sebastian Czaja, who heads the Free Democratic Party faction in the Berlin state parliament. He pinpointed Rotes Rathaus – Berlin’s town hall – the Brandenburg Gate, the Victory Column, the Charlottenburg Town Hall and the Reichstag dome as locations that could all do without being lit throughout the night.

“There is savings potential across Germany and the state should set a good example,” he told the Berlin tabloid B.Z.

Germany is experiencing an escalating energy crisis due to rising global prices, which were recently exacerbated by the uncertainty of gas supplies from Russia. The federal government has prepared a plan to ration gas, if things get worse. German officials on all levels have been urging citizens to conserve energy in various ways, like taking shorter showers and not using air conditioning.

EU nations unleashed a slew of anti-Russian sanctions in retaliation for the offensive in Ukraine in late February and declared their intention to drop Russian hydrocarbons entirely. Moscow said Europe only has itself to blame for the damage its economy is suffering as a result.