Biden reveals how he threatened China over Russia 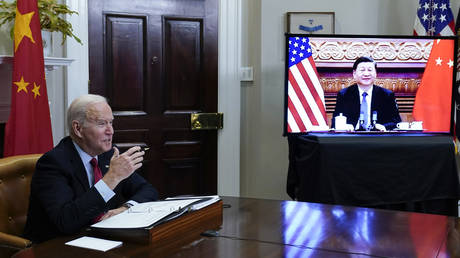 President Joe Biden said he tried to lay down the law with China early in the Russia-Ukraine conflict, warning President Xi Jinping that it would be a “gigantic mistake” to ignore the West’s anti-Moscow sanctions.

“I said that if you think that Americans and others will continue to invest in China based on your violating the sanctions that have been imposed on Russia, I think you’re making a gigantic mistake, but that’s your decision to make,” Biden said in a CBS News interview aired Sunday night.

Biden issued that warning when he called Xi in March, weeks after the Chinese leader met with Putin on the sidelines of the Winter Olympics on February 8 in Beijing. He claimed that he didn’t intend to threaten China; rather, he wanted to warn Xi of the heavy price that Beijing would pay for violating the sanctions.

Asked whether apparently warming relations between China and Russia might portend a “new, more complicated Cold War,” Biden rejected the notion. He suggested that Beijing has heeded his warning, at least partly. “Thus far, there’s no indication they’ve put forward weapons or other things that Russia has wanted, so uh, well, maybe I shouldn’t say any more.”

However, Washington and Beijing have clashed repeatedly over Ukraine. China has been a major buyer of Russian exports during the conflict, and Chinese officials have suggested that the US and NATO instigated the crisis by expanding their military alliance onto Moscow’s doorstep.

Xi has said that he told Biden on the March call that the Russia-Ukraine conflict should be brought to an end as soon as possible. He declined to blame Russia for the crisis and suggested that the US and its allies should try to help resolve Moscow’s security concerns to end the fighting.