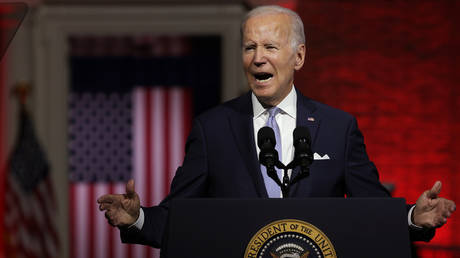 Republicans and independents overwhelmingly disdain the US president’s Philadelphia speech

More than half of Americans believe that President Joe Biden’s September 1 speech in Philadelphia was a “dangerous escalation” of political rhetoric, designed to “incite conflict” in the US. Republicans and independents are overwhelmingly alarmed by Biden’s words, and even 18% of Democrats agree, according to a poll published Tuesday by the Trafalgar Group.

Standing before Independence Hall in Philadelphia, Biden used Thursday’s televised speech to claim that “equality and democracy are under assault” by “MAGA Republicans” led by his predecessor Donald Trump.

According to the Trafalgar survey, 56.8% of the Americans saw the speech as “a dangerous escalation in rhetoric and is designed to incite conflict amongst Americans,” while 35.5% said it was “acceptable campaign messaging that is expected in an election year.”

“When voters tell you they think that the prepared remarks of a sitting president of the US is a dangerous escalation and was designed to incite conflict, we are living in terrifying times,” said Mark Meckler of Convention of States, the group that commissioned the poll.

“Perhaps even more terrifying is the fact that a huge majority of Democrats think this was just a routine, election year stump speech,” he added.

Biden, who repeatedly promised to unify the country, “has become the most divisive President in American history,” added Meckler, whose group advocates a constitutional convention to further limit the power of the US government.

In the speech critics have branded the “red sermon,” Biden claimed that Republicans “embrace anger… thrive on chaos… live not in the light of truth but in the shadow of lies,” and have no respect for the Constitution, the rule of law, or the results of a free election.

Trafalgar conducted the survey between Friday and Monday, on a sample of 1,084 likely general election voters. A quarter of those surveyed were independents, while the sample skewed Democrat at 39.3% versus 35.6% for Republicans.