Biting cold, dying migrants and war of words between EU and Minsk: Poland-Belarus conflict is getting worse 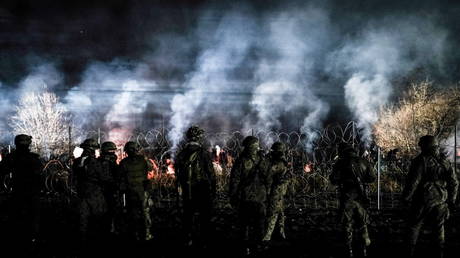 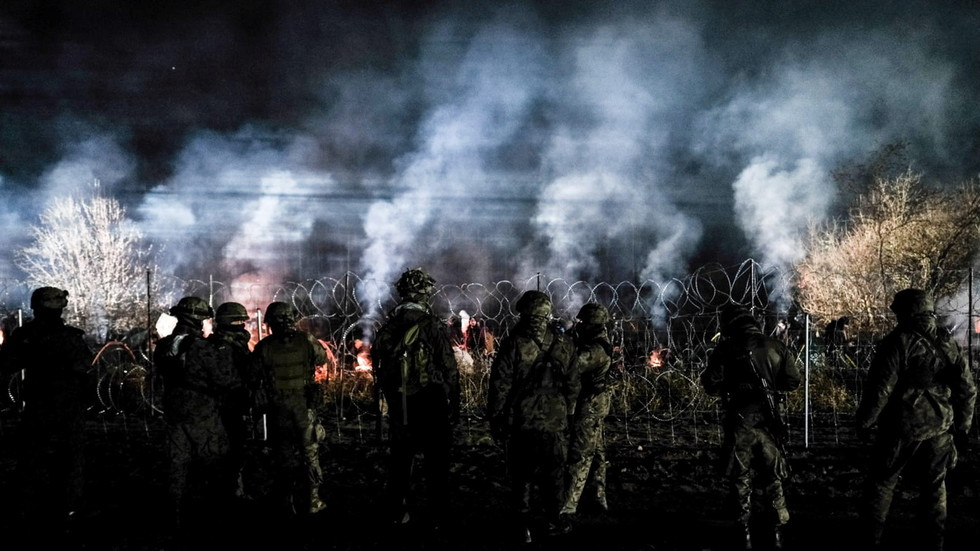 The migrant crisis continues at the Poland-Belarus border, with hundreds of people camping in harsh conditions as they seek to get into the EU. But while the weather is getting colder, the rhetoric from both sides is heating up.

The standoff entered into its second day on Tuesday, with asylum seekers camping on the Belarusian side of the border overnight. According to Polish estimates, up to 4,000 people remain at the border, with the largest group amassed near the Kuznica-Bruzhi border crossing.

Some 10,000 more migrants are believed to be elsewhere in Belarus, heading toward the border to try and get into the EU. Poland deployed additional police and troops, as well as assorted military hardware as the migrants tried to take the border by storm, cutting through razor wire and felling trees onto it.

Top Polish authorities said the amassment of troops was absolutely necessary to defend the country and the EU as a whole from the “attack” by the Belarusian “regime.”

Also on rt.com How thousands of migrants tried to take Belarus-Poland border by storm


“We currently have a camp of migrants who are blocked from the Belarusian side. There are about 1,000 people there, mostly young men. These are aggressive actions that we must repel, fulfilling our obligations as a member of the European Union,” Polish President Andrzej Duda said on Tuesday.

The ongoing military buildup has been criticized by the Belarusian authorities, with President Alexander Lukashenko condemning Warsaw’s actions. He rejected accusations of somehow “attacking” Poland, insisting he was not a “madman” to seek a conflict in the middle of Europe as it could easily spin out of control on any “misstep.”

“To conduct a war with these unfortunate people on the border of Poland with Belarus and move forward columns of tanks – it is clear that this is some kind of training or intimidation,” Lukashenko stated.

The EU, in turn, reiterated its accusations toward the Belarusian leadership of “weaponizing” the migration, with an EU Commission spokesperson stating that Lukashenko is acting like a “gangster” and effectively holding the migrants hostage.

“This is part of the inhuman and really gangster-style approach of the Lukashenko regime that he is lying to people, he is misusing people…and bringing them to Belarus under the false promise of having easy entry into the EU,” the spokesperson said. Earlier, EU Commission boss Ursula von der Leyen urged the bloc’s members to new, “extended sanctions” against Belarus over the ongoing crisis.

Top Polish officials went even further, with Polish PM Mateusz Morawiecki alleging that the migrants amassed at the border were not legit asylum seekers but “human shields” deliberately brought by Minsk to “destabilize” its neighbors and the whole EU. Moreover, the ongoing “hybrid attack” is actually staged by Russian President Vladimir Putin, with Lukashenko being merely a purveyor of Russia’s alleged “neo-imperial” policy.

“The latest attack by Lukashenko, who became an executor, but with Putin as the director in Moscow, shows resolve in the scenario of rebuilding the Russian empire,” the PM claimed.


The migrant situation at the borders between Belarus and its European neighbors has gradually deteriorated over the past few months, after Minsk said it opted to stop turning back people seeking to reach the EU in retaliation to sanctions imposed by the bloc. Brussels, however, has maintained that Belarus has been deliberately stirring up the flow of migrants artificially, a charge that Minsk has consistently denied. Since August, several people attempting to cross the border have died on both sides of it, according to Polish officials.