‘Black Bitch’ pub to be renamed 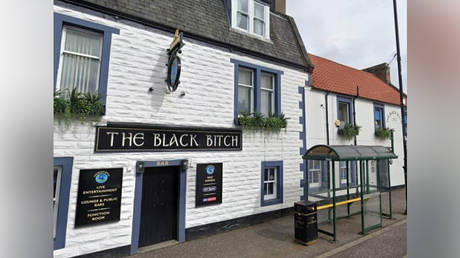 Greene King, the owners of the historic “Black Bitch” pub in West Lothian, Scotland have announced that they will proceed with renaming the establishment due to concerns its old name could be considered racist.

The 350-year-old pub, which has been the pride and joy of the town of Linlithgow, will now be called “The Willow Tree,” despite months of pressure from angry locals who have vehemently opposed the name change.

Campaigners say the original name has nothing to do with race and is instead a reference to a local legend of a female greyhound that brought food to its starving owner who was stranded on an island. The black dog is even featured on the town’s heraldic crest and has inspired a statue in the town center.

Linlithgow residents have filed some 500 objections to the local government and even launched an online petition against the name change, which managed to gather more than 11,000 signatures. The town’s total population is just under 13,000 people.

Nevertheless, Greene King has insisted that the pub’s name should change. “We know that name was not originally racist or offensive. But we have to appreciate that language has changed and evolved,” its operations manager told the BBC last year when the initiative was first announced.

The name change has now been officially given the go-ahead by the Scottish government, which ruled that there were no grounds to refuse plans to rebrand the historic pub. A government source told the Scottish Daily Express that, although the story of the black bitch clearly had “historic and cultural importance to Linlithgow,” it did not protect the pub since it has no direct connection to the legend and “Black Bitch” was not the original name of the establishment.

Meanwhile, the West Lothian History and Amenity Society has stated that the term “Black Bitch” has been associated with the town for over 700 years and that it is simply the correct description of a female canine with a black coat. “Nothing offensive, no misogyny involved,” they were quoted as saying by the Daily Express.

The group says many Linlithgow residents even refer to themselves as “black bitches” as a term of affection, and insist that “Greene King have jumped to the wrong conclusions and read something into the name which does not exist.”