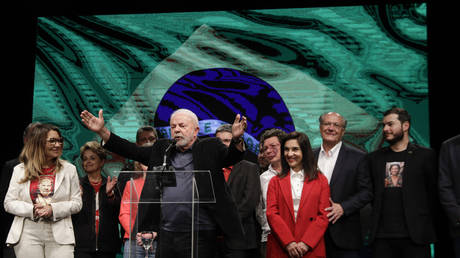 Brazil’s election authority has announced that none of the presidential hopefuls won a majority in the Sunday election, meaning that some 156 million eligible voters will be casting their ballots again on October 30 to choose between the frontrunners.

While a total of 11 candidates were vying for the top job in South America’s powerhouse, only two of them enjoy considerable support.

Luiz Inacio Lula da Silva, 76, who served as president from 2003 to 2010, received 48.1% of the vote, while Jair Bolsonaro, 67, garnered 43.5% support. With 98.8% of the votes tallied it was mathematically impossible for any of the contenders to win in the first round, according to electoral authorities.

“As I always said, we are going to win these elections – this is just extra time for us,” Lula declared from a hotel in downtown Sao Paulo on Sunday night. “The battle continues until our final victory.”

Lula da Silva, who represents Brazil’s Workers’ Party, has focused his campaign on overcoming social inequality and alleviating poverty. Among the measures he proposes are raising taxes on the rich, widening the social safety net, and increasing the minimum wage.

Bolsonaro’s campaign slogan has been ‘God, family, homeland, and liberty’. His vision of Brazil’s future includes privatizing the country’s state-owned oil company, opening the Amazon region to more mining, and easing gun regulations. Ahead of the Sunday vote, Bolsonaro warned that he will contest the results if he loses, calling into question the reliability of Brazil’s electronic voting system.