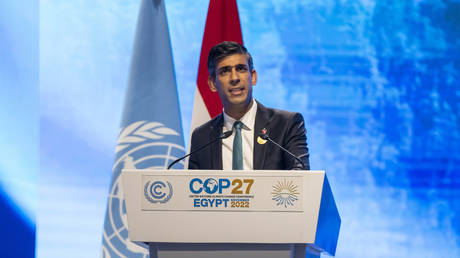 British Prime Minister Rishi Sunak was abruptly pulled out of a climate change conference mid-event, leaving some onlookers confused after staffers appeared beside him, whispered into his ear and then whisked him off the stage.

During a panel at the UN-sponsored COP27 event in Sharm El Sheikh, Egypt on Monday, Sunak was seen making a hasty exit from the room in footage shared to Twitter by Leo Hickman of CarbonBrief, a climate-focused news site.

Aides to the PM were reportedly seen approaching him on stage, with one relaying something to Sunak. Though he remained seated, another staffer spoke to him about two minutes later, after which he quickly left the hall through a rear exit.

Downing Street has so far given no explanation for the leader’s hasty departure, and it remains unclear what was said to him on stage. However, some local media reports suggested that Sunak “left early to prepare for a keynote climate change speech he would make later in the afternoon” – an address he did ultimately deliver.

About 2 mins before he left an aide came onto stage and was whispering in his ear for more than a minute…there was a discussion going on about, it seems, whether to leave at that moment. But Sunak stayed but another aide made decision to go back to him and urge him to leave pic.twitter.com/F2xSJc0sEw

Sunak made his international debut as prime minister at COP27, after ascending to the leadership position late last month. He met with a series of foreign leaders, and was greeted warmly by Sweden’s own newly appointed PM, Ulf Kristersson.

Though he was initially set to skip the COP27 event, claiming his office was busy preparing an upcoming budget proposal, Sunak reversed course following criticism from lawmakers and climate advocates. In announcing his decision to attend the event, the PM declared that there could be “no long-term prosperity without action on climate change,” vowing to help create a “secure, clean and sustainable future.”