Casualties reported amid attack on Sikh temple in Kabul 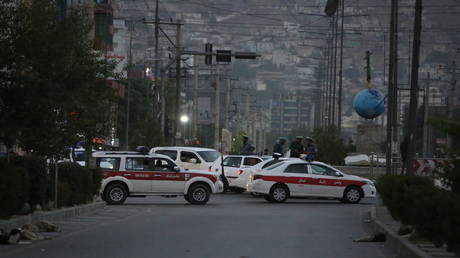 Unidentified assailants stormed a Sikh temple in Kabul on Saturday morning. Witnesses told the media they heard loud blasts and the sound of gunfire in the area.

Videos posted on social media show plumes of thick smoke rising over the area where the temple is reportedly located. According to media reports, the temple complex caught fire during the attack, which reportedly involved a shootout between the assailants and temple guards.

A local temple official, Gornam Singh, told journalists that dozens of people were inside when the attack occurred. “There were around 30 people inside the temple. We don’t know how many of them are alive or how many dead. The Taliban are not allowing us to go inside, we don’t know what to do,” he said, as cited by Reuters.

A Taliban spokesman for interior affairs said the attackers tried to drive a vehicle laden with explosives into the temple building, but it went off before reaching its target. The Taliban is now securing the site, he added. At least two people were injured in the incident, according to the Taliban.

India World Forum President Puneet Singh Chandhoke told The Hindu that at least two people were killed in the attack, and the fate of several others remains unknown. Some people were taken to the hospital, he added. According to Indian media, a security guard and an elderly man died in the attack.No one has claimed responsibility for the attack so far and it is unclear who is behind it. The Taliban has not named any suspects. Indian media has claimed that Islamic State (IS, formerly ISIS) could be responsible.

The predominantly Muslim country had a small Sikh community of several hundred before the Taliban takeover last year. Since that time, some Sikhs have left the country, but the Kabul temple has remained the center of the local community of 150, according to The Hindu.

The Kabul temple also came under attack in March 2020, when 25 people died in an assault that was blamed on IS.

Following the withdrawal of US-led forces last August, Afghanistan has witnessed several major attacks on mosques and hospitals, among other sites. In November 2021, a high-ranking Taliban commander was killed in an attack on Kabul’s military hospital.

The US and UN have warned that Islamic State and Al-Qaeda have grown in power since the Taliban regained control of the country.