China and North Korea to cooperate under ‘new situation’ 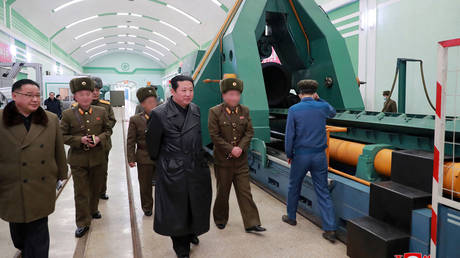 The publication shared a message from Xi to North Korean leader Kim Jong-un stating that Beijing was prepared to “develop the China-DPRK relations of friendship and cooperation” under a “new situation.” The statement offered no details and it’s unclear whether Xi was referring to the ongoing conflict between Russia and Ukraine.

The cryptic announcement comes on the same day Beijing hit out at Washington for sending a warship through the Taiwan Strait for the first time since November, a move the Chinese People’s Liberation Army’s Eastern Theater Command described as “provocative” – but which the US insisted was merely a “routine” journey through international waters.

Some in the US have suggested Beijing may strike to take Taiwan, which it considers its own territory, while Washington is focused on Russia’s military offensive in Ukraine.

North Korea restarted cross-border trade with China last month, releasing some of the economic tension built up by a self-imposed coronavirus blockade. China is responsible for 90% of the sanctions-stricken nation’s bilateral trade, and some believe Kim deliberately held off on testing missiles during the recent Beijing Winter Olympics out of deference to the country.

However, that pause was preceded by seven missile tests in the month of January, amid a stalemate in negotiations with the US. North Korea has previously warned it would not negotiate with the US until it curtails its “hostile policies” including sanctions.

Instead, Pyongyang appears to be pouring its efforts into developing hypersonic missiles like neighboring China and has threatened to restart its paused ICBM and nuke tests.

READ MORE: With Biden distracted by Russia and China, North Korea is ready to confront the US

KCNA has described the hypersonic system, which Kim has already tested, as the most significant part of the country’s next “five-year plan” to expand its military force and increase its “war deterrent” powers. South Korea has acknowledged the new missiles as “advanced,” while Japan’s defense minister described it as “hypersonic” and spoke of strengthening his country’s own defenses.

Previous Posts US strikes 'terrorists'
Next Posts Why does this influential, unelected globalist entity really exist?