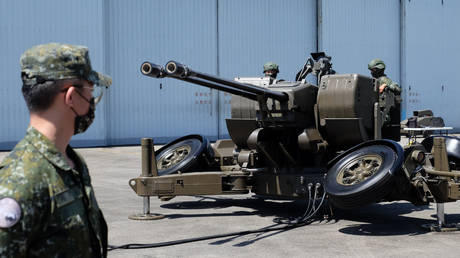 A sizable group of Chinese military vessels and aircraft has been detected around Taiwan amid heightened tensions in the region, the self-governed island’s Defense Ministry claimed on Sunday.

According to the ministry, eight Chinese Navy vessels and 23 aircraft were detected in Taiwan’s vicinity. Ten planes, it stated, “had flown on the east part of the median line of the Taiwan Strait,” which in practice serves as an unofficial barrier between mainland China and the island.

The Taiwanese military added that local combat air patrol has been given relevant instructions, and that Beijing’s activities are being closely monitored.

The apparent Chinese deployment comes a day after the US sent two warships to the Taiwan Strait, in what the Navy called a “routine” transit mission, meant to “demonstrate the United States’ commitment to a free and open Indo-Pacific.”

Beijing responded by putting its military on high alert and signaling its readiness “to stop any provocations in a timely manner.” Earlier, China also castigated the US, branding it “the destroyer of peace and stability in the Taiwan Strait.”

Tensions in the region have been running high since the controversial visit by US House Speaker Nancy Pelosi to Taipei in early August, which sent relations between Washington and Beijing into a tailspin and triggered a flurry of Chinese military activity in the area. At the time, Chinese Defense Ministry said it had conducted drills simulating a “blockade” of the island, as well as amphibious assaults and the striking of ground targets.

Beijing considers the self-governing island its own territory, and views visits by high-ranking US officials as attacks on its sovereignty and a violation of the ‘One China’ principle. The Taiwan Strait, which separates the self-governed island from mainland China, has been a source of military tension since 1949, when Chinese nationalists fled to the island after losing the Civil War to the Communists.

Previous Posts Turkey blasts Macron over 'imperialism' claims
Next Posts France is not at war, but from Macron’s rhetoric you would think otherwise