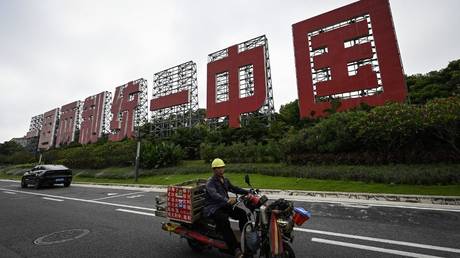 Beijing says it will strive for a peaceful solution to the crisis, while the US claims that China is readying itself for war

Beijing will do all it can to bring about the peaceful reunification of China and Taiwan, Chinese official Ma Xioaguang said, adding though, that amid rising military tensions in the Taiwan strait, China would be “unwavering” in defending itself.

Speaking at a press conference on Wednesday, Ma, a spokesman for China’s Taiwan Affairs Office, said that “the motherland must be reunified and will inevitably be reunified,” Reuters reported.

His insistence that Beijing would prefer a peaceful reunification, but would not rule out using its military, is in keeping with an official government position laid out in a white paper published last month.

In the document, the Chinese government affirmed its commitment to non-military means, but reserved “the option of taking all necessary measures” to return Taiwan to Chinese control.

Taiwan has governed itself since nationalist forces led by Chiang Kai-shek fled to the island in 1949, after they lost the civil war to the Communists. Taiwan’s current president, Tsai Ing-wen, is viewed in Beijing as a separatist. In addition to defying Beijing’s warnings and hosting top US officials on the island, Taipei has stepped up its purchases of US arms under her leadership and its diplomats have pushed Western nations to abandon their recognition of China’s sovereignty over Taiwan.

China has proposed a “one country, two systems” model for Taiwan. Under this, Taiwan could have a “social system different from the mainland,” on the condition that China’s “national sovereignty, security, and development interests” were not threatened, Ma explained on Wednesday.

Taipei rejected the proposal, with its foreign ministry declaring last month that only the people of Taiwan could decide the island’s future.

A visit to Taiwan by US House Speaker Nancy Pelosi in August prompted scathing condemnation from Beijing, which launched large-scale military drills in response. US warships answered by sailing through the Taiwan Strait, while Taipei held military drills of its own. A US Navy destroyer and a Canadian frigate sailed through the strait on Tuesday, with Chinese vessels monitoring their passage.