China offers friendly warning to US 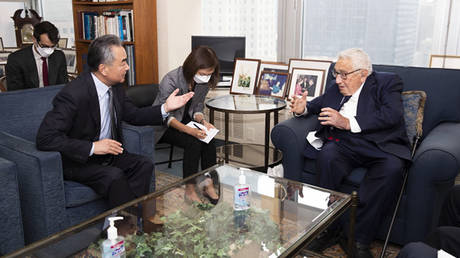 Washington is “wrong” in its perception of China and should not view it as a rival, Foreign Minister Wang Yi has said

A Cold War between China and the US would be a “disaster” for both countries and for the whole world, Foreign Minister Wang Yi warned on Monday, after meeting with former US Secretary of State Henry Kissinger.

During their meeting in New York, Wang Yi described Kissinger, who played a vital role in normalizing relations between Washington and Beijing in the 1970s, as a “good friend of the Chinese people.”

However, Beijing’s most senior diplomat cautioned that “an outbreak of a new Cold War will be a disaster for China and the US, as well as other parts of the world,” urging Washington to adopt a rational and pragmatic policy towards China.

According to the minister, Washington could do that by honoring its previous recognition of China’s position that Taiwan is part of its territory under the ‘One China’ policy.

Wang Yi said the recent visit by US House Speaker Nancy Pelosi to the island was detrimental for Sino-US relations, as was the US Congress’ Taiwan Policy Act 2022. The latter document, which was backed by the US Senate Foreign Relations Committee, aims to provide Taipei with billions of dollars in security assistance.

Wang went on to say that the US has “a wrong perception of China”, viewing it as “its most prominent rival and a long-term challenger”.

“Some people even described successful stories of China-US exchanges as failed ones. By doing so, they respect neither history nor themselves,” the statement read.

Peaceful reunification with Taiwan is China’s “best wish,” Wang said, adding that Beijing would do its best to achieve this end. He said, however, that the more “rampant” Taiwan’s independence-affirming activities become, “the less likely” the issue can be resolved peacefully.

His comments come after US President Joe Biden said on Sunday that American troops would defend Taiwan if it were attacked by China. This statement drew ire from Beijing, which said that it “deplores and firmly opposes” such a stance.

Taiwan has governed itself since nationalist forces led by Chiang Kai-shek fled to the island in 1949, after they lost the civil war to the Communists. The US government has, since the 1970s, officially recognized but not endorsed China’s sovereignty over Taiwan.