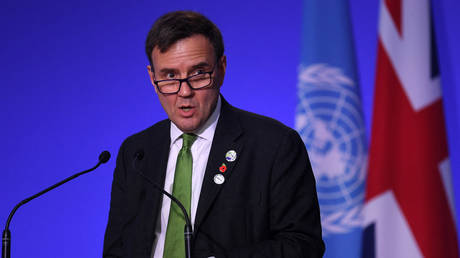 Britain should stop encouraging pro-independence forces in Taiwan, the Chinese Foreign Ministry has warned, after the UK announced that its trade policy minister will be visiting the island this week.

“There is only one China in the world, and Taiwan is an inalienable part of the Chinese territory,” Chinese Foreign Ministry spokesman Zhao Lijian insisted on Monday.

“We urge the British side to respect China’s sovereignty, abide by the one-China principle… and stop sending wrong signals to separatist forces for Taiwan independence,” he said.

Zhao also had a message for the authorities in Taipei, saying their attempts at “colluding with external forces to in search of independence are doomed to fail.”

Earlier on Monday, London announced that Trade Policy Minister Greg Hands would be going to Taiwan on a two-day visit, to meet with the island’s leader Tsai Ing-wen and co-host the 25th UK-Taiwan trade talks.

“Visiting Taiwan in person is a clear signal of the UK’s commitment to boosting UK-Taiwan trade ties. Like the UK, Taiwan is a champion of free and fair trade underpinned by a rules-based global trading system,” the British Department for International Trade said in a statement.

Britain has no formal diplomatic ties with Taiwan, but maintains economic cooperation with the island and a de facto has embassy in Taipei. According to Hands’s office, the £8 billion ($9.1 billion) trade partnership between the sides has increased by 14% over the past two years.

Beijing strongly opposes direct contacts between foreign nations and Taiwan, which has been self-governed since 1949, but never officially declared independence from China.

Tensions around Taiwan have remained high since August, when US House Speaker Nancy Pelosi visited Taipei despite warnings from the Chinese authorities. Beijing responded by launching large-scale military drills in the Taiwan Strait and slapping trade restrictions on the island.

Chinese leader Xi Jinping said last month that Beijing would “continue to strive for peaceful reunification with Taiwan,” but added that it “will never promise to renounce the use of force, and we reserve the option of taking all measures necessary.”