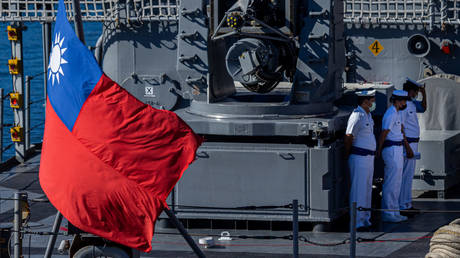 China is taking steps to dominate the waters around Taiwan, drilling with simulated attacks on US Navy warships and updating its invasion plans to reflect lessons learned from the Russia-Ukraine conflict, the Taiwanese Defense Ministry has reportedly warned lawmakers in Taipei.

China has been “using combat drills to carry out simulated attacks on US ships that enter the first island chain,” Reuters cited the Taiwanese Defense Ministry as saying on Thursday in a report to the self-governing island’s parliament. The “first island chain” refers to a stretch of islands running from the outskirts of Japan to Borneo – a region where Beijing aims to gain strategic control by 2035, the ministry said.

According to the report, China is taking steps to prevent other countries from coming to Taiwan’s aid in the event of an attack. China’s military has ramped up intimidation tactics this year to undermine Taipei’s morale and force reunification negotiations, the defense ministry said. China has “substantially threatened our nation’s defense security and endangered peace, security and stability in the areas near the Taiwan Strait.”

Beijing cut off military and climate ties with the US and conducted war games in the Taiwan Strait last month, after US House Speaker Nancy Pelolsi defied Beijing’s warnings against visiting Taiwan. China considers Taiwan to be part of its sovereign territory and has vowed to reunify with the breakaway province, by force if necessary.

The Taiwanese defense report suggested that China could use special forces to “decapitate” Taiwan’s command systems. Beijing also is capable of using cyberwarfare to disrupt communications and could blockade Taiwan, cut off energy supplies and seek to wreck the island’s economy, the ministry said.

Although the logistics of a full-scale invasion would be difficult, China has drafted civilian transport ships for amphibious military drills to help prepare for an attack, the report said. China’s studies of the Russia-Ukraine conflict have led to modifications of attack plans, the ministry added, without elaborating.

The report to lawmakers was submitted one day after Taiwanese military officials vowed to launch a forceful “counterattack” and “destroy enemy forces” if China’s People’s Liberation Army breaches Taipei’s waters or airspace within 12 nautical miles of the island.

Also on Wednesday, the Chinese Foreign Ministry said Beijing won’t resume cooperating with Washington on climate issues until the US addresses the damage done by Pelosi’s Taiwan trip. “The US side should dispel the negative influence of Pelosi scuttling to Taiwan.” Chinese officials have said the visit undermined Chinese sovereignty and encouraged separatists in Taipei.