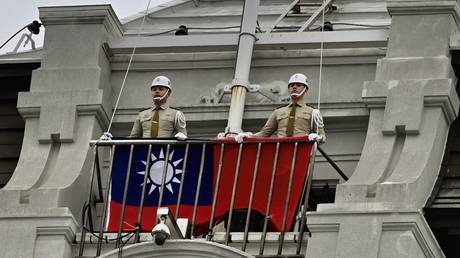 Prague should stop sending the wrong signals to separatist forces on the island, Beijing warns

The Czech Republic is damaging its ties with Beijing and violating China’s sovereignty by sending an official delegation to Taiwan, the Chinese embassy in Prague has said.

Beijing “firmly opposes” the visit as “Taiwan is an inalienable part of China’s territory,” the embassy said in a statement on Sunday.

A group of Czech officials and businessmen, led by prominent senator Jiri Drahos, is scheduled to arrive on the self-governed island, which has never officially declared independence from China, later in the day.

The move by Prague is “a serious violation of China’s national sovereignty and territorial integrity,” which inflicts “serious damage” on relations between China and Czech Republic, the statement reads.

The Chinese embassy urged the Czech Republic to “abide by its official commitment to the One China policy and immediately stop sending wrong signals to the ‘Taiwan independence’ separatist forces.”

Drahos told the Taiwanese media several days ago that he was looking forward to strengthening cooperation between the Czech Republic and Taiwan in epidemic prevention, semiconductors, museums and other areas.

Referring to tensions over the island since it was visited by US House Speaker Nancy Pelosi last month, the senator insisted that China should know the democratic world stands with Taiwan.

He added that European countries will not be sending send weapons to Taipei, but there is a consensus among them on boosting relations with the island in the areas of soft power, including culture and science, to improve its international visibility.

As for the prospects of a military conflict in Taiwan similar to the one currently being waged between Russia and Ukraine, Drahos suggested that the Chinese authorities were “relatively pragmatic” and would not use force to bring the island back under its control.