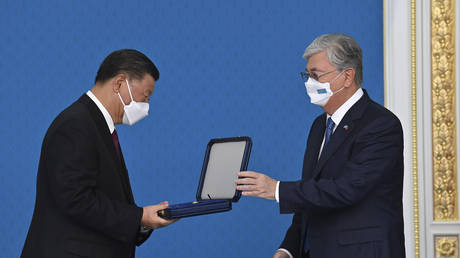 Chinese President Xi Jinping has visited Kazakhstan to mark 30 years since the two nations established diplomatic ties, his first trip abroad since the coronavirus pandemic erupted in late 2019, which will later include a meeting with his Russian counterpart.

Xi met with Kazakh President Kassym-Jomart Tokayev on Wednesday, who thanked him for the visit and declared a “golden 30th anniversary” for bilateral relations with China. The Chinese president also offered a speech, noting that “China and Kazakhstan are good neighbors, good friends and good partners who… share a common destiny.”

“No matter how the international situation changes, we will continue our strong support to Kazakhstan in protecting its independence, sovereignty and territorial integrity… and strongly oppose… the interference of any forces in the internal affairs of your country,” Xi continued, adding that he would hold talks with Tokayev “to jointly draw a new blueprint for China-Kazakhstan all-round cooperation.”

Xi’s trip to Kazakhstan is a rare event in recent years, as the president has remained in China to deal with the fallout of the Covid-19 outbreak, which was first detected in the Chinese metropolis of Wuhan. He will meet with other Central Asian and regional leaders at the summit of the Shanghai Cooperation Organization in Uzbekistan this week, including with Russian President Vladimir Putin, according to a Kremlin spokesman.

The two leaders are expected to discuss the conflict in Ukraine and rising tensions between Beijing and the West over Taiwan, the spokesman added, noting that the meeting will hold “special importance” given the “current international situation.”