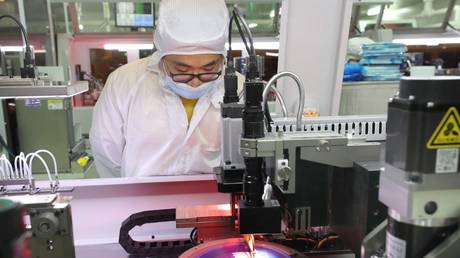 Semiconductor Manufacturing International Corp (SMIC), China’s top chip manufacturer, has quietly produced chips to the highest Western standards, despite US sanctions specifically aimed at hampering its development of such technology, according to a report confirmed by Bloomberg on Thursday.

A chip’s nanometer figure refers to the size of the transistors involved. With one nanometer equal to a billionth of a meter, the lower this number, the more transistors can be fit on a single chip, and the faster and more efficient the chip will be.

SMIC previously produced chips at 14nm, and the US has specifically tried to restrict any progress beyond this level. The Trump administration banned the export of equipment used to make semiconductors of 10nm and beyond to SMIC in 2020, and with US firms forbidden from supplying the Chinese company, the Biden administration is currently pressing Dutch machine supplier ASML to cease sales to SMIC.

ASML is already banned from selling its most advanced chipmaking tools to SMIC, and it is currently unclear whether the Dutch government will tighten this ban as Biden has requested.

These advanced tools have been used by Taiwan’s TSMC and South Korea’s Samsung to make 7nm semiconductors, while US-based Intel is projected to release its own 7nm chip next year. Analysts have noted that the most advanced US and European chips on the market right now are machined to 12nm.

It is unclear exactly how SMIC bypassed US export controls to hit the 7nm mark, although the previously-mentioned analysts have suggested that the company could have modified its 14nm tools.

As well as representing a leap ahead for China, which has previously lagged behind the US in semiconductor development, SMIC’s breakthrough presents an added geopolitical challenge for Washinton, where the foreign policy establishment is also trying to throttle Russia’s access to Western technology.

The US Department of Commerce in March threatened to withhold manufacturing software from SMIC, should the company continue exporting semiconductors to Russia and Belarus. The Chinese government, which partially owns SMIC, insisted at the time that it would not join the West’s sanctions campaign against Moscow and would “continue to maintain normal trade, economic, and financial ties” with Russia.

While China has stuck to its position, SMIC has explicitly stated that it has never had any Russian customers, and that it has “always been operating in compliance” with US sanctions.

Previous Posts No energy security without Russia, ‘like it or not’ – Hungary
Next Posts British spy chief reveals top priority