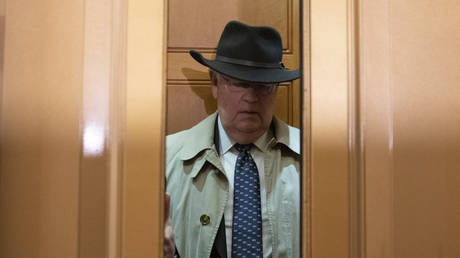 Ken Starr probed high-profile allegations of misconduct against the former president, including an infamous sex scandal

Ken Starr, the attorney who led major investigations into former President Bill Clinton which ultimately led to his impeachment, has died at the age of 76, according to his family.

Starr passed away on Tuesday at Baylor St. Luke’s Medical Center in Houston, Texas after “complications from surgery,” relatives said in a statement, which highlighted his lengthy career as a lawyer, judge and educator.

The attorney is best known for his role investigating the Clintons, first appointed as independent counsel in 1994 to probe questionable real estate investments made by both Bill and Hillary Clinton during the former’s tenure as the governor of Arkansas, dubbed the ‘Whitewater scandal.’ That investigation later widened into several other areas, including Clinton’s extramarital affair with 24-year-old White House intern Monica Lewinsky, as well as the mysterious death of deputy White House counsel Vince Foster, who was ultimately ruled to have committed suicide at Virginia’s Fort Marcy Park.

Those probes would culminate in the ‘Starr Report,’ issued in September of 1998, which outlined a total of 11 impeachable offenses by Clinton, among them perjury, abuse of power, witness tampering and obstruction of justice, all of which were related to the Lewinsky affair and the president’s conduct during the scandal.

The allegations made in the report resulted in Clinton’s 1998 impeachment, though lawmakers ultimately opted to bring only two articles for lying under oath and obstruction of justice. The president was later acquitted on both counts following a Senate trial, meaning he was not removed from office.

Lewinsky weighed in on the attorney’s passing in a Twitter post, saying “my thoughts about Ken Starr bring up complicated feelings… but of more importance, is that I imagine it’s a painful loss for those who love him.”

as i’m sure many can understand, my thoughts about ken starr bring up complicated feelings… but of more importance, is that i imagine it’s a painful loss for those who love him.

Later in life, Starr also made headlines after serving on the defense team of former President Donald Trump during his own impeachment trial in 2020, when he was accused of abuse of power and obstruction of Congress after allegedly pressuring Ukrainian President Vladimir Zelensky into a fraudulent investigation against Trump’s electoral rival at the time, Joe Biden. Like Clinton, however, Trump was acquitted by the Senate and completed his term – despite a second, equally unsuccessful impeachment effort launched in 2021.