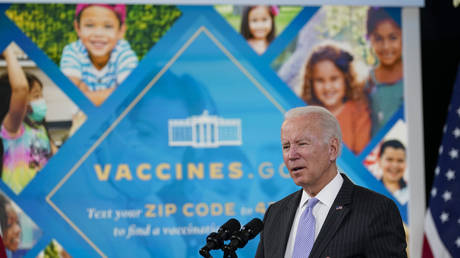 President Joe Biden has suffered another legal setback to his efforts to coerce Americans into getting vaccinated against Covid-19 – this time with a federal court blocking mandated jabs even for employees of his own administration.

US District Court Judge Jeffrey Vincent Brown in Texas ruled on Friday that the mandate overstepped Biden’s authority as president. After finding that the plaintiffs will likely prevail at trial, the judge issued a nationwide injunction, meaning the Biden administration will be barred from enforcing its vaccine order anywhere in the US.

The mandate applied to more than 3.5 million federal workers. It provided no option for submitting to regular Covid-19 testing in lieu of vaccination. White House press secretary Jen Psaki said on Friday that 98% of government employees had either been vaccinated or sought medical or religious exemptions. “We are confident in our legal authority here,” she said.

Brown disagreed, saying that it was a “bridge too far” for Biden – “with the stroke of a pen and without the input of Congress” – to force millions of employees to undergo a medical procedure as a condition of employment. The judge cited last week’s US Supreme Court ruling striking down Biden’s order requiring private-sector employers to force their workers to get inoculated.

The president clearly has authority to regulate employment policies, Brown said, but “the Supreme Court has expressly held that a Covid-19 vaccine mandate is not an employment regulation.” Interpreting the high court’s ruling in that way could set a significant legal precedent in claims against other employers that force their workers to get vaccinated.

While some private employers, such as Starbucks, have nixed their vaccine mandates in light of the Supreme Court’s ruling, others have said they’ll continue to require vaccination against Covid-19 without any government order. Carhartt, a maker of popular work clothes, is facing a boycott after its decision to double down on forced vaccines angered conservatives.

Brown served on the Texas Supreme Court from 2013 until 2019, when he was appointed by then-President Donald Trump for a federal court judgeship.