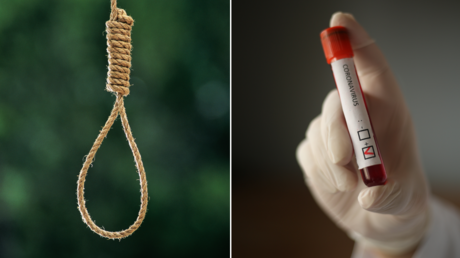 A Singapore court has postponed the execution of a Malaysian man who has spent over a decade on death row for drug smuggling offenses, after he tested positive for Covid-19 before he was scheduled to face the gallows.

On Tuesday, a Singaporean court had gathered to decide on an appeal in relation to Nagaenthran Dharmalingam, whose lawyer argued the man shouldn’t face the death penalty as he is considered not sound of mind.

However, the court adjourned proceedings on that issue – and instead said that in light of Dharmalingam’s recent Covid diagnosis, his execution would be postponed. Judge Andrew Phang told the court that the legal system must “use logic, common sense and humanity,” and delay enacting the death penalty.

“In view of the situation, the Court of Appeal granted a stay of the judicial execution with immediate effect until all pending proceedings are concluded,” said a statement from the Singapore Prison Service, which was released on the same day.

The notice also read that “Nagaenthran will receive medical attention and proceedings will resume on a date to be fixed” once he has recovered.

The 33-year-old man was due to be hanged on Wednesday. M. Ravi, Dharmalingam’s legal representative, said that “Covid has allowed him to live in this world, rather than kill him.”

His lawyer and activists have tried to spare the man from facing death on the grounds that Dharmalingam is intellectually challenged and has other disorders that hinder his decision-making abilities. The courts, however, have not been convinced, finding that the offender knew what he was doing.

Dharmalingam was detained in April 2009 for smuggling up to 43 grams of heroin into the city state. Under Singapore’s strict drug laws, trafficking more than 15 grams of the substance can result in the death penalty.

Singapore, however, has previously lifted the death sentence in respect of a Malaysian drug trafficker in a landmark verdict. In 2013, judges opted to impose a life sentence on a man who had smuggled 47 grams of heroin into Singapore, rather than execute him.