Dozens dead in US flood 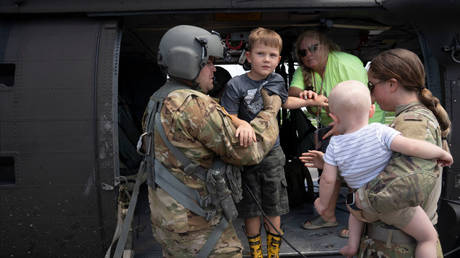 Torrential downpours in Kentucky have killed at least 25 people, and the search for missing people may drag on for weeks

Devastating rains that swept through the heart of the US Appalachian region have caused record flooding in eastern Kentucky, killing at least 25 people and leaving many more potential victims missing.

The death toll has risen repeatedly since Kentuckians woke up to catastrophic flooding in the early morning hours of Friday, and Governor Andy Beshear said on Saturday that it may take weeks to find all of the victims. Among the bodies recovered were those of four young children who were swept away from their parents arms as they clung to a tree.

“We are in search and rescue mode,” Beshear told reporters. “That count is going to continue to go up, and we don’t lose this many people in flooding. It’s just a real tough one.”

With dozens of roads and bridges either blocked by debris or washed out, rescue efforts have been hindered, leaving residents trapped on rooftops in some areas. At least 1,200 people have been rescued by boat and helicopter.

Power and water service remained disrupted to thousands of homes on Saturday. Mobile-phone service also has been knocked out in some areas, leaving people unable to contact missing friends and relatives. The state lacks accurate information on how many people were living in some of the remote areas devastated by the flood.

“Until we have full cell phone service up, you could assume there are hundreds of people – they might be fine, I hope they’re fine – that their loved ones haven’t established contact with them yet,” the governor said.

The region was inundated with eight to 10.5 inches of rain in a 24-hour period between Thursday and Friday, slamming some of the poorest areas in the US. The Kentucky River reportedly rose to six feet above its previous record. Heavy rains may return to the region on Sunday.

“I’m worried that we’re going to be finding bodies for weeks to come,” Beshear said.

The latest Kentucky disaster came in the same week that St. Louis was hit with more than 9 inches of rain in a 24-hour period on Monday and Tuesday, shattering a record that had stood since 1915. A second round of torrential rains struck St. Louis on Thursday, flooding parts of the city and leaving at least two people dead.

The damage in Kentucky is so severe that it may take years for communities to rebuild, Beshear said. Just last year, the state was struck by tornadoes that killed 70 people. “I don’t want to lose another Kentuckian,” the governor said. “We have lost far too many.”