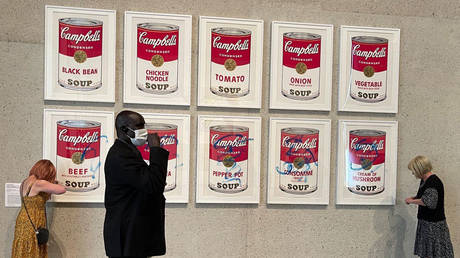 Eco-activists from a new campaign group calling themselves Stop Fossil Fuel Subsidies (StopFFS) vandalized Andy Warhol’s famous ‘Campbell’s Soup I’ at Australia’s National Gallery in Canberra on Tuesday. The incident is the latest action in a recent trend that has seen climate change protesters targeting famous artwork in Europe and beyond.

“Andy Warhol depicted consumerism gone mad in this iconic series. And now we have capitalism gone mad,” one of the activists, Bonnie Cassen, said after gluing her hand to the pop art masterpiece. The painting is protected by a glass frame and was thus not damaged.

According to the protester, described by StopFFS as “a mother of three and battling incurable cancer,” families are forced to choose between medicine and food for their children “while fossil fuel companies return record profits.”

“And yet our government gives $22,000 a minute in subsidies to the fossil fuel industry,” Cassen claimed.

The gallery said in a statement quoted by the local media that it was assessing the incident “in cooperation with the Australian Federal Police,” but would not comment further.

The police spokesman told the media that no arrests had been made.

The attack on Warhol’s painting was the second action undertaken by StopFFS, which calls on the government to “immediately stop all subsidies to the fossil fuel industry.” Last week, an activist with the group glued herself to a display at the Suffragette’s Exhibition at Parliament House in Australia’s capital city.

StopFFS considers itself part of a ‘Global Civil Resistance Network.’ The network, also known as A22 Network, lists among its member groups Britain’s Just Stop Oil, German’s Letzte Generation, as well as other organizations across Europe, in Canada, and New Zealand.

Recent examples of A22 Network’s “art disruption tactics” include vandalizing a Claude Monet painting with mashed potatoes in Potsdam, defacing the wax figure of King Charles III with chocolate in London and throwing tomato soup at masterpieces by Vincent Van Gogh and Johannes Vermeer in London and Hague, respectively. While none of the paintings were damaged, some museums are reportedly imposing additional security measures to protect artwork from vandalism.