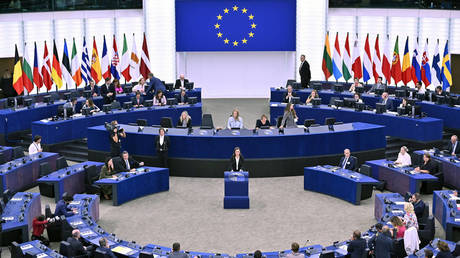 Brussels must urgently intervene to stop the brewing conflict between Yerevan and Baku, several MEPs have said

The EU must immediately impose sanctions against Azerbaijan and stop buying gas from Baku, French MEP Francois-Xavier Bellamy told the EU Parliament on Tuesday. He was joined by a number of other lawmakers calling for action after Armenia reported the deaths of dozens of its soldiers in the latest border clashes.

“If we act now, we can stop this war,” Bellamy said in a fiery speech as he blasted Baku’s strikes on Armenia as “criminal aggression” and called for the EU to prepare sanctions, as well as demanding a meeting of the UN Security Council. He warned that Europe’s security will be “directly threatened” by the conflict.

Bellamy was joined by a number of other MEPs who also demanded Brussels take swift action against Baku.

The head of the EU Parliament’s Delegation for relations with the South Caucasus, Marina Kaljurand, called on the international community and the EU in particular, to meet what she called an “unacceptable use of force” by Azerbaijan with “an unequivocal response.”

MEP Loucas Fourlas, a member of the EU Parliament’s friendship group with Armenia, urged the EU’s top diplomat, Josep Borrell, to intervene to stop what he called Baku’s “brutal attacks.”

The MEPs’ words came as Armenian Prime Minister Nikol Pashinyan said that at least 49 Armenian soldiers were killed in the latest border clashes.

Azerbaijan claimed its forces were responding to “large-scale provocations” by Armenia’s military, which it said planted mines and fired on Azerbaijani military positions, which Pashinyan denied.

Baku also said that its military suffered casualties, but did not provide an exact number. On Tuesday, Moscow called on both sides to refrain from further escalation and exercise restraint.

Tensions between the neighbors run high over the long-disputed region of Nagorno-Karabakh. Both countries have claimed sovereignty over the region since the early 1990s. It is a de-jure part of Azerbaijan, but is mostly populated by ethnic Armenians.

In 2020, Armenia and Azerbaijan fought a 44-day war over Nagorno-Karabakh, which saw Azerbaijani troops capturing some areas previously held by ethnic Armenian forces. The region also saw another flare-up in August when Baku demanded the “demilitarization” of Nargorno-Karabakh.