EU not at war with Russia – senior official 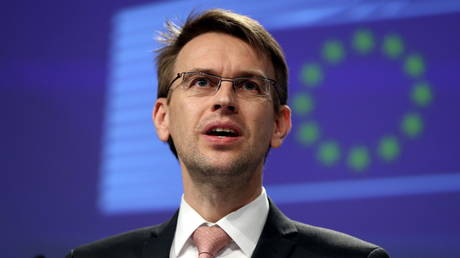 The European Union is not at war with Russia, but it would continue to support Ukraine in its fight against Moscow, EU foreign policy spokesman Peter Stano said on Wednesday. The statement came hours after Russian President Vladimir Putin announced a partial mobilization of troops.

Speaking at a press conference, Stano was asked whether the EU is in a state of war with Russia, given that earlier Vladimir Putin had claimed that Russia is facing “the entire Western military machine” in Ukraine. The foreign policy spokesman replied in the negative.

“Of course we are not in war with Russia. We are supporting Ukraine’s legitimate, justified fight to defend its people and its territory,” he said, adding that Kiev is protecting not only itself, but also European democratic values.

Stano also denounced the mobilization announcement, calling it “just another proof” that Putin is not interested in peace and seeks to “escalate his war of aggression.” “This is also yet another sign of his desperation,” Stano added.

While the official vowed that the EU would impose “consequences” on Russia over its latest moves in Ukraine, he didn’t announce any new sanctions. At the same time, Stano signaled that EU members have been “discussing joint action in response” to the latest developments in the Ukraine conflict, declining, however, to provide any details.

Stano’s comments come after Spanish Prime Minister Pedro Sanchez claimed that Moscow is battling not only Kiev’s forces but the whole EU in Ukraine, while using fossil fuels “as a war tool” to exacerbate the energy crunch Europe had been grappling with for months.

On Wednesday, Vladimir Putin announced a partial mobilization which calls on 300,000 reservists to take part in the conflict with Ukraine. This move comes a day after the two Donbass republics and Russian-controlled Zaporozhye and Kherson regions decided to hold a referendum from September 23 to 27, on whether to unite with the Russian Federation.