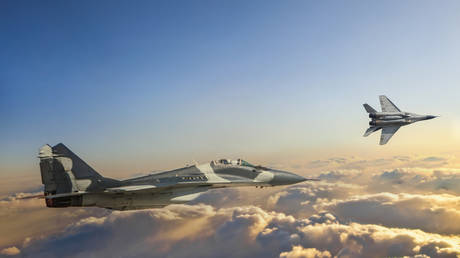 The European Union’s High Representative for Foreign Affairs Josep Borrell has revealed that a 450 million Euro package of “lethal aid” for Ukraine will include fighter jets, with all weapons delivered through Poland. Borrell also said that around half of the Russian Central Bank’s reserves would be frozen.

Speaking hours after EU Commission President Ursula von der Leyen announced that the bloc would “finance the purchase and delivery of weapons and other equipment” for Ukraine, Borrell revealed that the EU’s “lethal aid” package would amount to 450 million euros ($501 million), with another 50 million euros ($55,744) going toward non-lethal aid, including fuel and medical supplies.

“Certainly, we are going to supply arms…we are even going to provide fighting jets,” Borrell told reporters. “We are not just talking about ammunition.”

Borrell added that Ukrainian Foreign Minister Dmytro Kuleba had requested fighter jets that Ukrainian pilots could operate, and that such jets could be procured from certain EU countries. The Ukrainian Air Force uses Soviet-designed MiG-29 and Sukhoi Su-24, Su-25, and Su-27 jets in combat roles, and with the Su-25 used by Bulgaria and the MiG-29 used by Poland, Bulgaria and Slovakia, the jets will likely be sourced from these countries.

Borrell said that military aid will be delivered to Ukraine via Poland, though he did not specify whether the jets would be flown into Ukraine or driven across the border.

The EU’s top diplomat also announced that financial sanctions would freeze “about half of the financial reserves of the Russian central bank.” Half of Russia’s reserves are in banks in G7 countries, Borrell stated, explaining that the EU can not block the other half located in Russia or elsewhere.

While individual EU nations, as well as the UK and US, have promised caches of military aid to Ukraine in recent days, the bloc’s move is an unprecedented one.

It comes four days into Russia’s military offensive on Ukraine, which was launched after months of negotiations with the west over Kiev’s aspirations of NATO membership failed. Russia has long considered the idea of Ukraine joining the alliance an unacceptable security risk, yet leaders in Kiev, Washington, and Brussels refused to rule out membership for Ukraine in the Cold War-era pact.

Delegations from Ukraine and Russia plan to meet in Belarus on Monday for tentative negotiations.