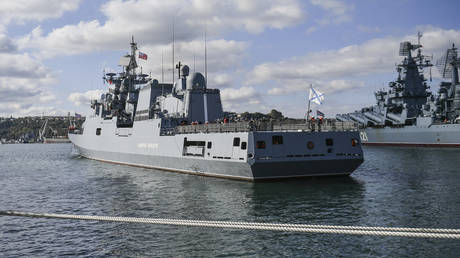 America will retaliate harshly if Russia uses nuclear weapons in Ukraine, the former commander of the US Army in Europe says

The US could destroy Russia’s Crimea-based Black Sea Fleet or its bases on the peninsula if Moscow resorts to using nuclear weapons in Ukraine, the former commander of the US Army in Europe, Ben Hodges, has said.

In an interview with the Daily Mail on Wednesday, Hodges described the possibility of Russian President Vladimir Putin ordering the deployment of nukes as “very unlikely.”

Putin will not do so because “he knows the US will have to respond if Russia uses a nuclear weapon,” he claimed.

“The US response may not be nuclear… but could very well be a devastating strike that could, for example, destroy the Black Sea Fleet or destroy Russian bases in Crimea,” Hodges, who was in charge of the US forces in Europe between 2014 and 2018, said. “So, I think President Putin and those around him will be reluctant to draw the US into the conflict directly.”

The comments were made in response to Putin’s address earlier that day, in which he said Russia is fighting “the entire Western military machine” in Ukraine, citing the lavish assistance in lethal aid and intelligence provided to Kiev by the US, UK, EU and others.

“If the territorial integrity of our nation is threatened, we will certainly use all the means that we have to defend Russia and our people,” he warned.

In the speech, Putin announced a partial mobilization in Russia, with Defense Minister Sergey Shoigu later clarifying that around 300,000 reservists will be called up.

The shift in Moscow’s strategy in Ukraine occurred following the announcement by the People’s Republics of Donetsk and Lugansk, and the Russian-held regions of Zaporozhye and Kherson, that they will hold referendums on joining Russia between September 23 and 27.