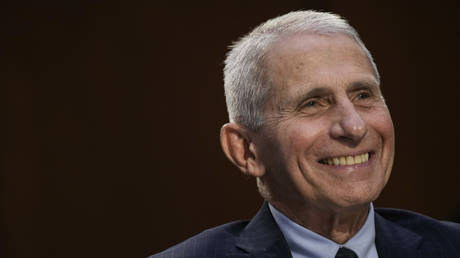 The top US health official profited handsomely amid the pandemic, financial disclosures appear to show

US chief medical officer Anthony Fauci’s net worth surged to $12.6 million in 2021, nearly twice the $7.6 million it had been in 2019, watchdog group OpenTheBooks revealed on Friday, citing financial disclosures it obtained from Fauci’s employer, the National Institutes of Health.

Already the highest-paid employee in the federal government before the pandemic as director of the National Institutes for Allergies and Infectious Diseases, Fauci pulled down a salary of $456,000 in 2021 and $480,000 in 2022. However, that paycheck represents just a fraction of the money he made while his Covid-19 policies helped push the US economy into a recession.

The disclosures show multiple trusts, retirement accounts, and other financial assets, all of which seem to have appreciated in value during the pandemic even as much of the real economy suffered. Book royalties and the $1 million Dan David Prize from Israel, as well as appearances and speaking fees, round out Fauci’s Covid-19 windfall. When OpenTheBooks asked the NIH to see all royalties paid to the doctor, however, the document they received – which would have shown exactly how much Fauci was financially benefiting from drugs and other patents – was reportedly heavily redacted.

“While Dr. Fauci has been a government bureaucrat for more than 55 years, his household net worth skyrocketed during the pandemic,” OpenTheBooks CEO Adam Andrzejewski told Fox News, attributing the doctor’s wealth spurt to “career-end salary spiking, lucrative cash prizes awarded by nonprofit organizations around the world, and an ever-larger investment portfolio.”

Fauci has been criticized throughout the pandemic for allegedly profiting off the pricey antiviral medication remdesivir, which he proclaimed the standard for treating Covid-19 despite lackluster clinical trial results and having been against the initial advice of the World Health Organization.

Fauci appears to dislike discussing his finances in public, having been caught on a hot mic describing Republican Senator Roger Marshall as a “moron” for merely asking to see what were supposed to be publicly available documents. The Kansas senator, who is also a doctor, asked to see Fauci’s financials during a January hearing only for the NIAID chief to insist they were already public – a statement that was not true at the time. OpenTheBooks sued for access in January and only recently received the documents it posted on Friday.

READ MORE: US governor says ‘little elf’ Fauci should be ‘chucked across the Potomac’