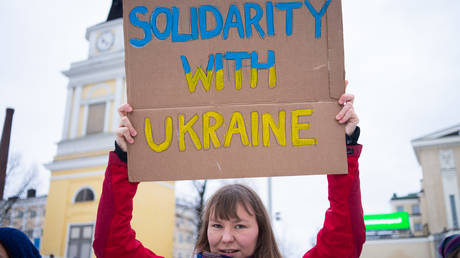 With 50,000 signatures, the civil initiative for Finland to join NATO heads to Parliament

A controversial Finnish civil initiative to join NATO has received over 50,000 votes online as of Saturday, meaning by law it must be voted upon by Parliament. Finland has never before sought membership in the transatlantic alliance, but the ongoing hostilities in Ukraine have prompted some Finns to doubt their nation’s independence is safe without reinforcements from the West.

Given that Finland joining NATO would place the alliance directly on Russia’s border, Moscow has warned against the move. Foreign Ministry spokesperson Maria Zakharova informed both Finland and Sweden on Friday that there would be “serious military and political consequences” requiring “retaliatory steps” by the Russian Federation if they joined NATO.

“We view Finland’s course for maintaining the policy of military non-alignment as an important factor contributing to stability and security in northern Europe and on the European continent as a whole,” she continued, pointing to “consistent efforts by NATO and some of its members, primarily the US, to drag Finland as well as Sweden into the alliance.”

However, Finland’s ambassador to the US Mikko Hautala boasted to Fox News on Saturday that, “We have one of the best armies in Europe,” insisting Finland was “not in a position that we will get scared because of one statement” from Moscow.

“We have a strong defense. We have really good international partners,” he said, claiming Russia has been threatening Finland regarding its NATO ambitions for years.

Foreign Minister Pekka Haavisto concurred in an interview with Finnish media on Saturday, claiming “we’ve heard this before” from Russia and suggesting nothing significant would change should NATO extend its border all the way to Russia – other than Moscow recalculating its own defense planning. The two countries share a 1,340km (830 mile) land border, the longest between Russia and any EU member state.

Since 2012, Finland’s Open Ministry website has allowed any resident of the country to log in and propose a new bill. If the suggestion receives over 50,000 votes, Parliament must take it up for consideration. Finland has a population of over 5.55 million people.

Sweden has been less talkative regarding its own plans. Prime Minister Magdalena Andersson reportedly told the AP that “It is Sweden that itself and independently decides on our security policy line.”