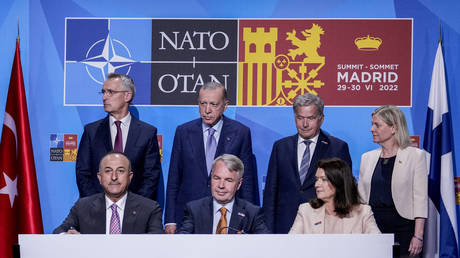 A coffee break served as a turning point in the fraught negotiations, Pekka Haavisto says

The deal with Turkey, which paved the way for Finland and Sweden to join NATO, was struck in part thanks to a coffee break, Finnish Foreign Minister Pekka Haavisto has revealed.

Tense negotiations had been underway for weeks after Ankara announced in May that it would not support the two Nordic nations’ bids to join the US-led military alliance, accusing them of harboring members of the Kurdistan Workers’ Party (PKK), which it deems a terrorist organization, and for supporting arms embargoes on Turkey.

The sides held several meetings in Ankara and Brussels, but were unable to find common ground on a range of issues. So, when the agreement was reached ahead of the NATO summit in Madrid on Tuesday, it came as a surprise even for Foreign Minister Haavisto, the diplomat told Reuters on Wednesday.

The “intense” top-level talks in the Spanish capital went on for two hours, but the leaders of Turkey, Finland and Sweden still struggled to agree on some sticking points, merely repeating their earlier stances, the minister recalled.

“And then we had a coffee break and as always, during the coffee break, great ideas came up and then in the end, towards the end of the meeting, it was easier to come to the conclusion,” Haavisto said.

He recounted the same story to Spain’s El Mundo paper on Thursday, calling the coffee break “a turning point” in the discussions. As the leaders were sipping their brew they “found creative ideas and were able to amend the text to find a mutually satisfying solution,” the minister said.

Coffee’s role as a unifying factor between Turkey and Finland turns out to be more than just a coincidence. According to the International Coffee Association, Finland has the second-highest per capita consumption of the drink. The Turks are also renowned coffee lovers, with their internationally popular ‘Turkish coffee’ – made in a special cezve pot using finely ground beans, without filtering.

According to Haavisto, the main challenge in the talks with Turkey was to bridge differences on what each country defines as “terrorism.” But in the end, Helsinki, Stockholm and Ankara “could separate those issues in the statement and that actually (brought) us to the conclusion,” he said.

The key promises given by the Nordic nation to Turkey involved taking action against groups Ankara deems to be “terrorists” and lifting an arms embargo.

On Thursday, Turkish President Recep Tayyip Erdogan warned that Ankara will be closely monitoring how Finland and Sweden abide by their pledges.

“The key thing is for promises to come true,” Erdogan insisted, adding that if it doesn’t happen the applications by Helsinki and Stockholm simply won’t be forwarded to the Turkish parliament for ratification.

Finland and Sweden, who stayed out of NATO during the Cold War, applied to join the bloc on May 18, citing concerns for their security after the launch of the Russian military offensive in Ukraine in late February.