France is not at war, but from Macron’s rhetoric you would think otherwise 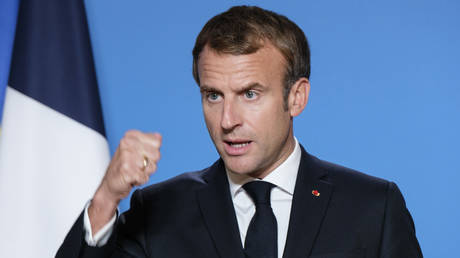 Earlier this summer, French President Emmanuel Macron evoked the country’s “entry into a war economy in which I believe we will organize ourselves in the long term.” It would have sounded familiar to anyone who paid attention during the Covid-19 pandemic.

Announcing the first Covid lockdowns in March 2020, Macron said six times that France was “at war” – with Covid. “Never has France had to take such decisions in peacetime,” he said, persisting with the militaristic rhetoric that served to justify locking an entire nation inside their homes for weeks on end.

It was a stretch, of course. France wasn’t ‘at war’ with a virus. But the language was so hyperbolic coming from someone in a position of the utmost national authority that people were either frightened or convinced they were fulfilling a patriotic duty by sitting at home all day and watching Netflix. In any case, if you questioned or opposed Macron’s war framing, you were branded self-centered and irresponsible by those on whom the rhetoric had worked.

The fear-mongering gave Macron and his government the wiggle room to limit people’s liberties in the absence of substantial opposition. Poor domestic policies and unpopular decisions apparently get carte blanche if they’re in service of a war of some kind.

The pandemic has barely waned and Macron is already back to try the same strategy of employing hyperbolic, militaristic rhetoric amid the conflict in Ukraine, even though neither France nor the EU is at war with Russia.

What France and the EU have done, however, is sanction their own cheap energy supply from Russia on which their economies are highly dependent. Initially, they patted themselves on the back because they figured they could just snap their fingers and switch to something greener. When that didn’t work, they blamed Russian President Vladimir Putin for their own knee-jerk choices. And now, they’re trying to portray themselves as being at war with Russia as a way to explain to their own citizens why they’re heading for an energy and cost-of-living crisis that was entirely avoidable.

So last week, Macron said during a commemorative address that “war has returned a few hours from our borders on European soil.” There is, of course, no war on French soil, or that of the European Union. France, like its EU allies, voluntarily chose to deplete its military stocks to the detriment of its own national security merely at the request of Ukrainian President Vladimir Zelensky. It also chose to amputate a crucial economic lifeline without a viable backup plan. French nuclear reactors have been eroding and neglected for so long under the state’s plan to move away from nuclear power (before Macron realized what a bad idea that was) that it’s unclear whether France will have enough energy when crunch time arrives. It’s kind of like when the government’s Covid panic and war framing served to obscure the state’s years of mismanagement of the now-eroded health care system

French citizens entrusted the government to prioritize French national and economic security above all else. Instead, Macron has compromised it by going along with EU’s self-harming edicts. And now he seems to be playing the tired game of trying to scare up some leeway from the people so they don’t rebel.

“I am thinking of our people, who will need the strength of soul to face the coming times, to resist uncertainties…united, to agree to pay the price for our freedom and of our values,” Macron said last week. Ukraine isn’t defending French values or freedoms. But just like locking ourselves at home was sold to us as the price to pay for saving lives during Covid, appealing to the French sense of solidarity or fraternity – written into its national slogan – has been too often used as a way to pacify the masses.

Some members of the political opposition are seeing through Macron’s manipulation. “France’s serious role is to encourage peace, not war, by returning to the Minsk agreements which NATO and Macron flouted,” Tweeted former minister and French presidential candidate Ségolène Royal. “And let’s urgently identify the triggers and the profiteers of war, the values and priorities of the French people.”

Clear definitions are important to avoid being fooled by fancy rhetorical gymnastics. France isn’t at war with Russia. There is no war within the European Union. Therefore there is no ‘war economy’ to justify. The EU and its leaders (including Macron) are complicit in a self-imposed crisis as a result of their own sanctions policy – which is still completely reversible.

Why is it important to get all of this straight? Because officials around Europe are already framing the looming backlash against the pending crisis as the doing of populists and extremists rather than of their own. If they succeed, it will only be because their own constituents allowed them to get away with every single other lie leading up to it.