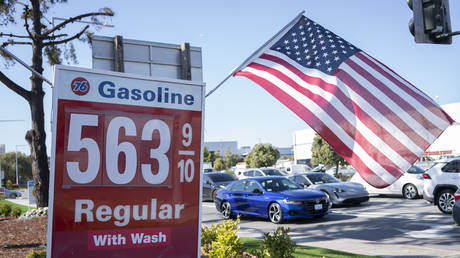 US Senator Debbie Stabenow is facing a flood of criticism on social media after she bragged about the advantages of having an electric car, which means she doesn’t have to think about soaring fuel costs as she travels from Michigan to Washington, DC.

As the Senate Finance Committee discussed rising gas prices on Tuesday, the Democrat revealed that she had recently got an electric car and can happily pass all the gas stations on her way from her constituency to the capital.

“It didn’t matter how high it was,” the smiling senator said, referring to the price of fuel.

She told committee members and US Treasury Secretary Janet Yellen, who was also present, that she’s looking forward to a time when people will no longer be dependent on the “whims of the oil companies and international markets.”

Social media users were quick to point out that millions of people are currently struggling to put fuel in their cars, never mind buying expensive electric vehicles.

Representative Mike Kelly said that Stabenow’s remarks demonstrate her party’s detachment from reality. He stressed that the average annual income of his constituents amounts to $54,627.

Republican Congressman Byron Donalds took to social media to remind Stabenow that the national average gas price in Michigan is $5.171 and that the working-class Michiganers “are not laughing.”

DEMs continue to laugh at the struggles of working-class Americans who are suffering due to Biden’s Price Hike. Just look at how happy @SenStabenow is when boasting about driving her EV.The national avg gas price in MI is $5.171.I can assure you Michiganders aren’t laughing. https://t.co/LlC45q9wu6

“In a functioning administration, Janet Yellen would be out the door tomorrow. But that’s not what happened at today’s hearing. Instead, Democrats took turns bragging about their $50,000 electric cars,” Fox News anchor Tucker Carlson said.

Ordinary Americans have been even more categorical in their assessments of the senator’s statement, with some calling her “an out of touch idiot” and others claiming ironically that she “is mocking us peasants.”

US fuel prices have been setting new records for several weeks now. The first surge came at the end of winter, when Russia launched its military operation in Ukraine, and Western states responded with sanctions, which put the global supply of Russian energy in jeopardy.