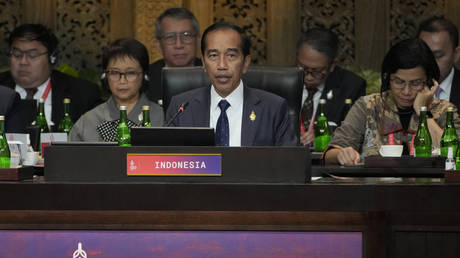 Indonesia’s president calls on world leaders need to show responsibility and avoid conflict, for the sake of humanity

In his opening address to the gathering on Tuesday, the president, who goes by the nickname Jokowi, stressed that the world’s leading economies, comprising the G20, share a responsibility to humanity.

“Being responsible means creating not zero-sum situations, being responsible here also means that we must end the war. If the war does not end, it will be difficult for the world to move forward,” he said, in an apparent reference to the conflict in Ukraine.

President Widodo warned G20 leaders against ramping up global rivalries and returning to the form of confrontation that defined the second half of the 20th century.

“We should not divide the world into parts. We must not allow the world to fall into another cold war,” he urged his guests, calling for wisdom, leadership and cooperation.

The G20 summit has been largely overshadowed by the Ukraine conflict, which started almost nine months ago, also pitting Russia against the US and its allies, which have pledged to arm and fund Kiev “for as long as it takes” to defeat Moscow on the battlefield. They have also imposed harsh economic sanctions against Russia.

The sanctions have failed to garner support from some of the world’s leading economies, notably China, India and Brazil.

Beijing, which has criticized Moscow’s decision to send troops into Ukraine, has also blamed Washington’s actions and the expansion of NATO as root causes of the crisis.

The Indonesian leader called for immediate steps to address the shortage of food and fertilizer on the global market. Both issues have been exacerbated by anti-Russia sanctions. Moscow says it is largely unable to export grain and fertilizers, due restrictions affecting insurance for merchant ships and port services.

On Tuesday, Ukraine’s President Vladimir Zelensky delivered a speech to G20 attendees via videolink. He addressed the “G19”, presumably disregarding Russian membership, and reiterated Kiev’s uncompromising position. He demanded a full pullout of Russian troops to pre-2014 positions, reparations, and other concessions before a peace deal can be signed.