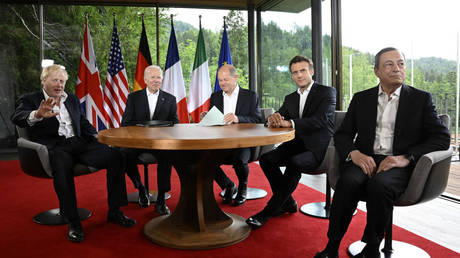 According to the media outlet, finance ministers of the club will thrash out restrictions during a virtual meeting on Friday

The finance ministers of the Group of Seven nations are likely to reach an agreement on Friday on capping the price they’re willing to pay for Russian oil, Reuters news agency has reported, citing anonymous sources. The officials are expected to reveal the general outline of a plan following an online meeting.

In its article published on Friday, Reuters quoted an unnamed European G7 official as saying that “a deal is likely.” The same source, however, noted that it was not clear how much detail will be forthcoming.

On Thursday, British Chancellor of the Exchequer Nadhim Zahawi expressed hope that G7 finance ministers will “have a statement that will mean that we can move forward at pace to deliver this.”

White House spokesperson Karine Jean-Pierre, however, declined to comment so as not to “get ahead of that meeting.”

Russia has seen its oil export volumes drop following the start of its military offensive against Ukraine in late February, but its revenue rose in June by $700 million from May, as reported by the International Energy Agency in August, on the back of higher global oil prices.

The price cap, which Western leaders agreed to in principle back in June, would limit how much refiners and traders can pay for Russian crude. The move is aimed at reducing the Kremlin’s revenues while keeping Russian oil on the market to avoid price spikes.

Moscow has already made it clear that it would not comply, instead shipping its crude to countries not bound by the cap.

Speaking to Reuters, several anonymous G7 officials expressed doubt as to whether the restriction would be effective if it was implemented only by the group members – the US, Britain, Canada, France, Germany, Italy and Japan. They added that for the measure to tangibly affect Russia’s oil revenues, the G7 would need the backing of major oil consumers, such as China and India.

Such a scenario is unlikely, according to Reuters. Moreover, while approximately 95% of the world’s tanker fleet currently rely on London-brokered shipping insurance, it would still be possible to find alternatives, the article pointed out, citing anonymous analysts.