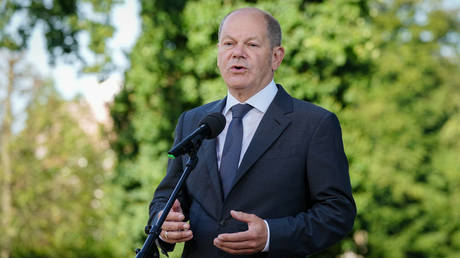 Olaf Scholz has described the statesman as a “bold reformer,” thanks to whom “democracy and freedom” prevailed in Europe

German Chancellor Olaf Scholz has described Mikhail Gorbachev as the politician thanks to whom democracy prevailed in Europe, including its central and eastern parts. The Soviet Union’s final leader passed away late on Tuesday at the age of 91.

Speaking on Wednesday, Scholz called Gorbachev a “bold reformer” and a daring statesman.

“We will not forget that perestroika made it possible that an attempt at establishing democracy could be undertaken in Russia, that democracy and freedom became possible in Europe, that Germany could reunite and the iron curtain disappeared,” the German chancellor said.

He added that it was thanks to Gorbachev that “democracy movements” prevailed in Central and Eastern Europe in the late 1980’s.

Scholz noted that his passing came at a time when “democracy in Russia failed,” as Russian President Vladimir Putin wages a “dreadful war against a neighboring country, Ukraine” and digs “new trenches in Europe.”

“I bow to a great statesman. Germany is grateful to him for his determining contribution to the German unity,” Steinmeier said.

He also thanked Gorbachev for his “courage” that saw the bridging of East and West and noted the role his vision played in this process.

The German president proceeded to claim that Gorbachev had been suffering in the years that followed, because his dream seemed ever more distant.

Gorbachev served as the general secretary of the Central Committee of the Communist Party of the Soviet Union from 1985 to 1990, going on to become the first and last president of the USSR. He left the office after the country broke up at the end of 1991.

As the USSR’s leader, Gorbachev initiated sweeping reforms, known as perestroika, aimed at liberalizing the economy and public life. It was under his rule that the Berlin Wall fell and the Cold War came to an end, for which he was awarded the Nobel Peace Prize in 1990.