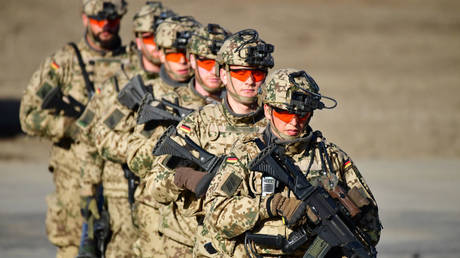 A German military officer who pretended to be a Syrian refugee has been convicted of charges stemming from a terrorist plot to kill politicians and other public figures.

The 33-year-old German armed forces soldier, identified by authorities only as 1st Lt. Franco A., was found guilty on Friday of preparing a serious act of violent subversion, as well as weapons crimes and fraud. He was ordered to serve five-and-a-half years in prison, nearly matching the six years and three months that had been requested by prosecutors.

Franco A. fraudulently received state benefits after registering as an asylum-seeker, and he may have intended to get migrants blamed for his planned attacks. His legal troubles began after he was caught in February 2017 while trying to retrieve a handgun that he’d hidden in a Vienna airport bathroom.

Although Franco A. was released by Austrian police, the incident was reported to German authorities, who discovered that his fingerprint matched that of a man who had registered as a Syrian asylum-seeker. He was later accused of living a double life for 15 months, plotting terrorist attacks that could be blamed on his false refugee identity while continuing to work full-time in the military.

Prosecutors branded the soldier as a “right-wing terrorist” and said investigators found that he was hoarding guns, ammunition and explosives. His case triggered an investigation into far-right extremism within the ranks of Germany’s military.

Franco A., who had been released from jail in November 2017 pending disposition of his case, was ordered back into custody last February, after he was found to be carrying a bag containing Nazi medals, patches, and songbooks. A later search of his apartment revealed more Nazi memorabilia, as well as machetes and a forged vaccine pass.

Lawyers for Franco A. reportedly plan to appeal the guilty verdict. The lieutenant denied the most serious allegations against him, saying that he stockpiled guns in case public order collapsed and that he didn’t plan any attacks. He claimed that he posed as a migrant to expose flaws in Germany’s refugee system.