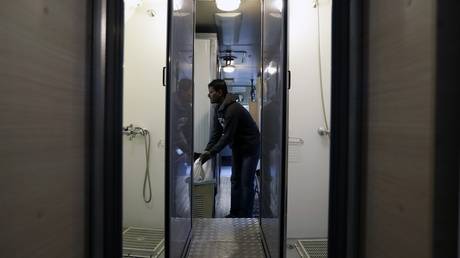 When threatened by an energy crunch, people can save a lot by using a washcloth instead of taking showers “all the time,” the head of the German state of Baden-Württemberg Winfried Kretschmann said in an interview on Friday.

Kretschmann, a Green, runs the southwestern German state bordering France and Switzerland, with some 11 million residents. Porsche and Mercedes-Benz have their headquarters in the state capital of Stuttgart. Speaking to the Südwest Presse newspaper about the energy crisis Germany is currently facing, Kretschmann revealed what steps he personally takes to avoid wasting energy.

The minister-president said he had a “huge” solar power rig on the roof of his house, drove an electric car, and only heated a single room, which he called a “healthier” habit anyway. When asked if he also took cold showers, Kretschmann said he did even better.

You don’t have to shower all the time. There’s the washcloth, after all – a useful invention.

Almost two thirds of Germans have already reduced their time in the shower in response to repeated government appeals to do so, according to last month’s poll by research institute INSA.

Noting the increase in heating costs was not as problematic for people of his income bracket, Kretschmann did admit that some Germans could not make ends meet without government aid. However, he argued that the Covid-19 pandemic has shown the German government will be there for people hit the hardest by the crisis.

This time there would be some “loss in terms of prosperity,” Kretschmann said. “We all have to adjust to that.”

Germany is facing a dire energy crunch as gas shipments from Russia, its biggest supplier, are steadily declining due to technical issues arising from Ukraine-related sanctions. Scrambling to mitigate the growing crisis, both the federal government and the states have been urging citizens to lower energy consumption by turning down their air conditioners and using less hot water.

Berlin has started reviving coal power plants, slapped an additional levy on gas use, and is reportedly considering keeping its remaining nuclear reactors online past their scheduled phaseout this year.