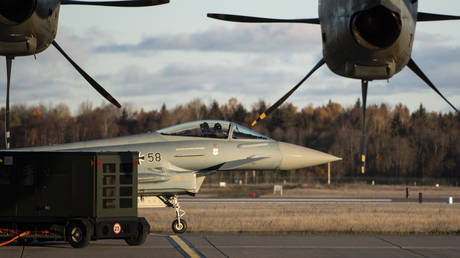 Germany has suggested sending combat jets on patrol missions to Poland as an “immediate response” to an incident in which two people were killed in a missile blast in a village not far from the border with Ukraine. The projectile allegedly belonged to Kiev’s forces.

“We will offer Poland enhanced air policing with combat air patrols,” German Defense Ministry spokesman Christian Thiels told a media briefing on Wednesday. “This can happen tomorrow if Poland wants it,” he added.

According to the ministry, the jets would not need to be relocated to Polish territory since they can fly the missions directly from German bases. It also said that Defense Minister Christine Lambrecht was expected to discuss the issue with her Polish counterpart, Mariusz Błaszczak.

The exact number of German Eurofighter jets that could be sent to patrol the Polish skies is also yet to be discussed, according to media reports.

German warplanes carried out similar missions back in July amid the ongoing conflict between Ukraine and Russia.

Warsaw has not commented on Berlin’s initiative so far.

The offer came a day after the missile blast killed two civilians in the Polish village of Przewodow, not far from the country’s border with Ukraine. Ukrainian President Vladimir Zelensky rushed to blame Moscow for the incident, claiming that the projectile was Russian and that its landing on Polish soil was an attack on NATO’s collective security, thereby urging retaliation.

The Polish foreign minister initially claimed that the missile was “Russian-made.” Later, however, Polish President Andrzej Duda admitted that it was likely a Ukrainian air defense missile.

The Russian Defense Ministry called the claims about Moscow’s involvement a “provocation” aimed at escalating tensions.

On Wednesday, a day after the incident, Ukrainian President Vladimir Zelensky continued to maintain it was not a Ukrainian missile that hit the Polish territory. His words sparked a critical reaction from US President Joe Biden, who said “that’s not the evidence.”