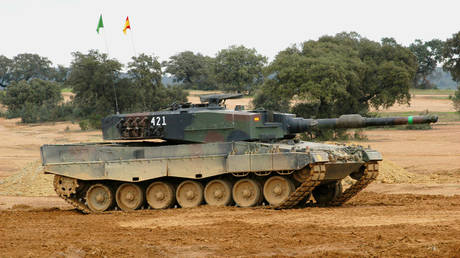 The German government reportedly raised the alarm over Spain’s supposed plans to provide as many as 40 German-made tanks to Ukraine, which were revealed in a media report last Sunday. Madrid allegedly had to scale back the scheme dramatically amid Berlin’s concerns, Business Insider Germany said on Saturday. The Spanish government reportedly ended up apologizing to Chancellor Olaf Scholz.

The outlet noted that the shipment of Leopard 2 battle tanks “would be the first time a NATO member state would send modern tanks to Ukraine” – which would presumably put pressure on Germany to follow suit. This would be “extremely awkward” for the German leadership, Business Insider said.

The Spanish government has reportedly revised its initial plans, first reported on by El Pais earlier this month, down to a maximum of 10 vehicles.

Business Insider, citing unnamed German government sources, claimed the delivery of the tanks is in doubt, as they are out of commission and badly in need of repair, which could take up to several months. Since the Leopard-2 battle tanks Spain was reportedly planning to give Kiev were bought from Germany in the 1990s, Madrid would first need Berlin to clear the delivery. According to German law, the government must review any deals involving German-made weapons, including resale to third countries.

The initial El Pais report cited Spanish government sources who said Madrid was finalizing the shipment of a battery of anti-aircraft missiles. On top of that, Spain was reportedly willing to provide German-made Leopard 2 A4 combat tanks to Kiev, as well as training for Ukrainian personnel.

Entering service in 1979, the model (and variations) is the main battle tank in the German Armed Forces. Over a dozen more countries, both in Europe and elsewhere, have purchased it as well.

Since the start of Russia’s offensive in Ukraine in late February, a number of EU member states, as well as the US, UK, and Australia, have been supplying Ukraine with weapons and ammunition.

While these nations stopped short of delivering heavy weapons to Kiev during the first month of the conflict, some have recently begun sending howitzers and multiple launch rocket systems, among other things, to Ukraine.

Russia has consistently condemned the shipments, claiming they only serve to prolong the conflict.