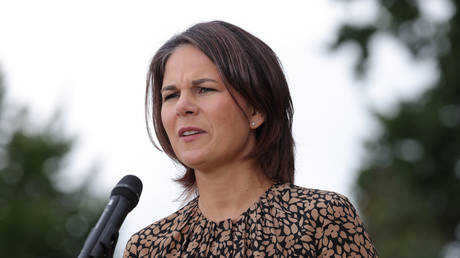 The EU could suspend a visa facilitation agreement with Moscow instead of shutting out Russians completely, German Foreign Minister Annalena Baerbock has suggested ahead of the bloc’s meeting on the issue in Prague.

The minister called her proposal a “bridge” between those in the EU who demand a total visa ban and those who want to “carry on as … if nothing has happened.” “I believe that we can find a good solution in Prague,” she told a German government meeting on Tuesday. Under her plan, the issuance of multiple-entry and multi-year visas could also be suspended, according to the German media.

The visa facilitation agreement between Russia and the EU was signed back in 2007. It allows Russians to present fewer documents when filing visa applications and also pay smaller fees. It also reduces the processing time. So far, the bloc has only suspended visa facilitation for business travelers and diplomats.

Nations that consider themselves “particularly affected” could also examine Russian applicants’ travel purposes “very carefully,” the minister said. However, she also said that the new visa policy should “continue to allow people-to-people contacts in the EU with Russian nationals who are not associated with the Russian government.”

In particular, scientists, students, and artists should be able to enter the EU regardless of whether they face persecution at home, the German media reported, citing Baerbock. Ukraine and its most hardline EU supporters have been calling for an almost total ban on visas to Russian citizens, with exceptions only on humanitarian grounds.

The measure is touted as a proportionate response to Russia’s military operation in Ukraine and the failure of its people to oppose their government’s policies. Some nations, such as Estonia, have claimed that banning Russian visitors was necessary for national security.

In addition to Germany, France has also advocated a less restrictive approach, arguing that a collective punishment of the Russian people would only alienate them from the West and boost domestic support of the country’s government.

The EU is expected to make a decision on the issue on August 31.