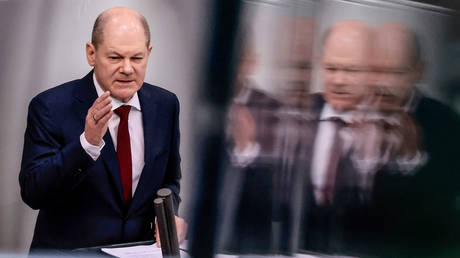 German Chancellor Olaf Scholz said on Sunday that he’ll invest Є100 billion ($113 billion) in weaponry and hike defense spending to 2% of GDP, in light of the ongoing conflict in Ukraine. Successive German governments have resisted investing in the country’s military, at times angering the US.

“It’s clear we need to invest significantly more in the security of our country, in order to protect our freedom and our democracy,” the left-wing leader told a special sitting of the Bundestag (the German Parliament). Promising to reverse decades of low expenditure in this year’s budget, Scholz told lawmakers that the move was aimed squarely at Moscow.

“We have to ask ourselves: What capacities does Putin’s Russia have? And which capacities do we need to counter his threats?” he asked.

Scholz’s plan involves spending Є100 billion in procuring new weaponry, including Israeli drones and American F-35 fighter jets, the latter of which he said would be used to boost the NATO alliance’s nuclear deterrent against Russia.

He also said that Germany would immediately raise its defense expenditure to above 2% of the country’s GDP, a goal NATO requires its members to commit to, but few do in practice. Previously, Germany had pledged to meet this commitment by 2024, then by 2031 when the first target was missed.

Germany’s failure to reach this NATO target has been criticized in Washington. Former US President Donald Trump excoriated Berlin for its spending policies, accusing Germany of freeloading off the US’ military protection and “making a fortune” off US troops stationed there.

“They should be paying their bills,” he told Fox News in 2020. “Why should we defend countries and not be reimbursed?”

Scholz’s move toward rearmament is a dramatic turnaround for Germany. As NATO members poured weapons into Ukraine in recent weeks, Berlin banned the sale of arms to Kiev, with its reluctance to intervene likely a result of its dependence on Russian gas imports. However, that ban was lifted on Saturday, as Germany also dropped its opposition to cutting some Russian banks off from the SWIFT banking network.

Germany’s armed forces have long been in need of modernization. A 2019 report revealed that fewer than 20% of the country’s 68 Tiger combat helicopters and fewer than 30% of its 136 Eurofighter jets were operational in 2018. The report also found that ammunition stocks were low and soldiers were missing essential gear, including boots, clothing, and bedding.

Compounding the dysfunction, the German military regularly has to purge itself of extremism within its ranks. In addition to sanctioning individual soldiers involved in extremism, the military in 2020 disbanded an entire wing of the special forces after an investigation found its members were stockpiling ammunition and performing Nazi salutes.

Previous Posts The mystery of what happens when we die: solved
Next Posts EU to send fighter jets to Ukraine