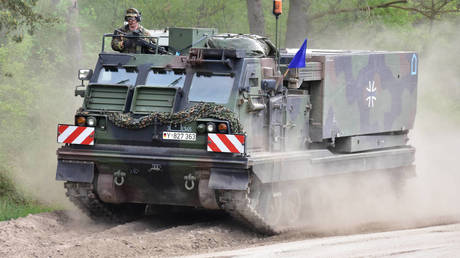 Berlin plans to send three weapon systems to Kiev instead of four, due to a lack of ammunition, according to media reports

Germany will provide Ukraine with three multiple launch rocket systems in the coming months, Defense Minister Christine Lambrecht confirmed on the sidelines of a NATO meeting on Wednesday evening. That figure is down from four due to a lack of munitions, according to Business Insider.

The Mars-II rocket systems will come from the stocks of the German Armed Forces, the Bundeswehr, Lambrecht said at a meeting involving representatives from almost 50 countries. They will be in addition to rocket launchers the US and the UK have promised to send to Ukraine.

Business Insider cited its sources as saying Germany’s multiple rocket launchers are unable to fire a significant part of their ammunition due to missing software updates planned for the end of this year. The delivery was only made possible by the US agreeing to supply additional ammunition. The technical setback means that less than a half of the Mars-II systems possessed by the Bundeswehr are operational, according to the news website.

Lambrecht did not directly confirm the reports, but said the deliveries to Ukraine will involve not only rocket launchers but “hundreds” of munitions along with spare parts.

“It is important for me to use this opportunity to supply [Ukraine] from the Bundeswehr [stocks] but I go to the limit by doing that,” the minister added.

According to Lambrecht, Ukrainian troops will start training to use the systems in the coming weeks, and the launchers will arrive in Kiev “in late July or early August.”

Mars-II is a modification of the US-made M270 MLRS. The Bundeswehr says on its website that Mars-II launchers are capable of “accurately” hitting targets at a distance of up to 84 kilometers, although arms manufacturer KMW gives a range of 70 kilometers.

In early June, the German edition of Business Insider reported that Berlin would have to overcome various hurdles before delivering much of the weaponry promised to Kiev.

Germany’s IRIS-T SL air defense systems will not arrive before the year’s end, the site claimed, and a three-way arms deal with Greece could be scuppered by a potential escalation between Athens and Turkey.