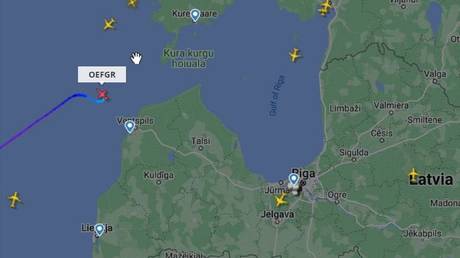 A private jet with four on board has supposedly flown across half of Europe with no one in the cockpit, according to the media

Swedish authorities have launched a major search-and-rescue operation after a private jet crashed into the sea off the coast of Latvia, Swedish and German media report. The jet, which took off from southern Spain on Sunday, reportedly flew over several European nations with supposedly no one in the cockpit, according to the media reports.

The private jet, identified by the German tabloid Bild as a US-made Cessna aircraft, was heading from the southern Spanish city of Jerez to Germany’s Cologne. According to the media, at least six people were onboard, including a pilot, a man, a woman and a young girl. Their identities have not been made public so far.

The pilot reported some “air pressure issues” in the cockpit soon after takeoff but the jet continued its flight, according to Bild. Air traffic control officers lost contact with the aircraft at some point as it was over the territory of southern France, according to the media. French and Spanish fighter jets were then scrambled to check up on the plane.

According to Bild, the fighter jets’ pilots, who discovered the private aircraft still flying, failed to spot anyone either in the cockpit or in the cabin. Yet, they allowed the jet to continue on its course. The private aircraft did not land in Cologne and continued its flight northeast.

Another fighter jet was scrambled from a German base in Rostock, according to Bild. Its pilot also failed to find out what was happening on board, although the military aircraft escorted the private jet up to the north-eastern German island of Rugen, the paper added.

According to the Flightradar24 monitoring website, the “ghost flight” as it was already being dubbed by some media, maintained a steady altitude of 11 kilometers and a speed of around 670 kilometers per hour for most of its flight. After it had flown over the southern tip of the Swedish island of Gotland, it started losing both speed and altitude before eventually disappearing from the radars over the sea northwest of the Latvian city of Ventspils.

The Swedish Maritime Administration and the nation’s coast guard sent a helicopter and an airplane to the potential crash site. A Stena Line ferry was also diverted to assist in the rescue efforts, the Swedish media reported.

“There is no hope for survivors,” Johan Ahlin, a Maritime and Air Rescue Center official, told the Swedish media, adding that “the crash was only a matter of time.” The Swedish Maritime Administration also said that “small pieces of wreckage and oil slicks” on the water were found at the potential crash site.

The circumstances surrounding the “ghost flight” remain largely a mystery. It is not the first such incident, though. In June, an unidentified aircraft managed to fly over several European nations without approval before its crew vanished without a trace.

In the June case, however, the plane that took off from Lithuania safely landed at an abandoned airfield in Bulgaria. Its crew managed to flee the scene and remain unidentified. Officials in several countries were closely following the flight, with the US, Hungarian, and Romanian air forces sending military jets to escort it at various points. The escorts broke off when it entered Bulgarian airspace, though.